Company and community misses man who died in crash

AUSTIN — When former G&G Heating and Air Conditioning owner Jim Grunewald’s motorcycle crashed along Interstate 35 on April 8, the company was not the only party to feel the loss.

“He has become so much a part of the fabric of Austin,” said his brother, Phil Grunewald. “Everybody virtually in town knows him and they all love him.” 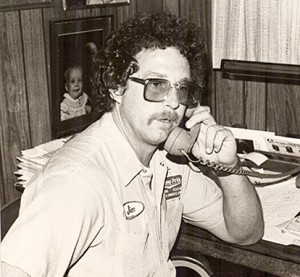 Jim Grunewald, who worked in heating and cooling systems since he was 14, talks to a client on the phone. –Submitted

“He would do barbecues, cookouts and get-togethers,” said his son Chris. “We’d do trips over to the Mississippi River.”

Jim was born Nov. 9, 1950, in Davenport, Iowa, to Henry and Ella “Marie” (Ellison) Grunewald. He and his family lived in Musketine, Iowa, for about four years before they moved to Austin, where Jim lived for the rest of his life.

After graduating from Pacelli High School in 1968, Jim enlisted in the U.S. Army and served from 1970 to 1972. He then spent a year in the National Guard.

Jim married Nancy Tschida, a fellow Pacelli graduate, on Sept. 18, 1972, at Queen of Angel’s Church. During their 41-year marriage, they raised four children and were grandparents to 13. Jim later took care of Nancy, who came down with Parkinson’s disease.

Chris’ wife, Laura, said Jim had a way of keeping spirits high for those around him. 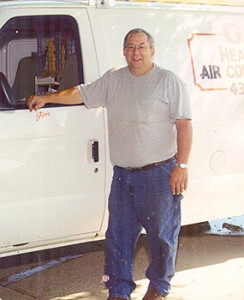 Jim Grunewald, who retired in January from G&G Heating and Air Conditioning, stands beside a company truck.

“He was always joking around, making everybody’s life good,” Laura said. “Everybody he helped, he touched their hearts.”

In conversation, Jim enjoyed making playful jabs at people, and was able to calm the stress when things got problematic.

“He made a tense situation a little bit easier,” Chris said.

Phil said Jim was “big into the community,” and couldn’t go into a restaurant without half a dozen people turning to greet him. Jim was involved in the Red Cross for 25 years as disaster chairman, where he coordinated relief efforts. He also was involved with the Mower County Historical Society board and coached youth football.

Jim’s father, Henry, had been working for a different heating company that was going out of business. He decided to be an entrepreneur and start his own business. Henry and Phil went in on it together, renting the building where G&G still is today.

Ownership of the business shuffled between family members. Jim became a partner at one point, and sole owner at another. Then, for most of the last seven years, he ran it along with his daughter, Angie, and her husband, Mike.

Since it started, the business itself has changed in many ways. Modern gas furnaces have replaced the common coal-fired furnaces from G&G’s early days. Apart from catering to residential customers, the company also handles light commercial clients.

Jim retired in January from the family business, several months before the motorcycle accident that ended his life. Mike and Angie will run G&G going forward.

After his accident, Jim’s CaringBridge website, which allows friends and family to keep up-to-date with someone who is sick or seriously injured, was flush with more than 3,600 visits logged as of Friday afternoon. Many left their regrets or sympathies, including several of G&G’s competitors, Phil said.

In the wake of Jim’s passing, Phil has been helping Jim’s children get through the experience and take care of their mother.

“I did not ever imagine burying him,” said Phil, who is 10 years Jim’s senior. “It’s been kind of mind boggling.”

Visitation for Jim was on Sunday from 3 to 6 p.m. at Clasen-Jordan Mortuary and at the church one hour before a 10:30 a.m. memorial Mass today at St. Edward’s Catholic Church. In lieu of flowers, the family has asked for donations to be made to the Mower County Chapter of the American Red Cross in Jim’s memory.