Corey Goodnature to be on race car

A decal of Corey Goodnature’s name will be displayed on Busch’s No. 78 Furniture Row Chevy car during the race.

Corey was a graduate of Albert Lea High School and a decorated U.S. Army Chinook helicopter pilot. On June 28, 2005, he died in a crash on a mission to save a team of Navy SEALs under heavy fire in the mountains of Afghanistan, his father, Don Goodnature, said.

The Corey Goodnature Memorial Golf Event each June in Albert Lea raises money for a scholarship fund in his name. 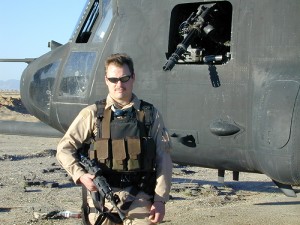 Corey Goodnature, a graduate of Albert Lea High School, will be remembered for his service in the U.S. Army at the NASCAR Sprint Cup Series on April 21. His name will be on a decal on Kurt Busch’s No. 78 Furniture Row Chevy car. — Submitted

Corey will be honored at Kansas Speedway as part of an Armed Forces Foundation program that honors fallen heroes.

“It’s just a little way of giving back to the men and women who have given so much to our country,” an Armed Forces Foundation spokesman said. “We hope to keep it going.”

The foundation dedicates each NASCAR race to an American soldier. Soldiers are nominated to the foundation by email, Facebook or Twitter.

“The foundation emailed him back a few days later and said they chose Corey,” Don said.

Corey and Don had never been to a NASCAR race. Now, the Goodnature family has been invited to Kansas City to be honored guests.

Don said he is planning the trip with his wife, Deb, his daughter, Amy, and her husband, Ben Purdy.

“We’re getting tickets, parking passes, hot passes to get us down in the pits and an opportunity to go to the driver’s meeting,” Don said. “It should be an exciting deal.”

The foundation spokesman also mentioned that the Goodnature family will get to meet Busch and take a photo with the car.

Corey’s passing still weighs heavy on the hearts of those in the Goodnature household.

“He was my best friend and just a great guy,” Don said.

Corey will be remembered during the national broadcast on Fox at noon April 21. He is survived by his wife, Laurie, and sons Shea and Brennan.