On March 21, Cub Scout Pack 105 had its pinewood derby at Holiday Dodge in Austin. The track inside the building was set up for a month. The Kiwanis Club of Austin runs the pack races. On April 13, the Twin Valley Council district races were held for all the Cub Scouts around the district. 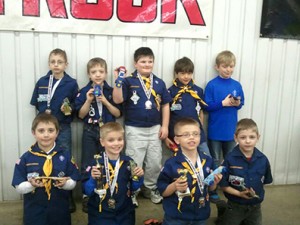 Because Pack 105 is a small pack and doesn’t have a track of its own, they like to use the one in Austin.

At the derby in March, Pack 105 had 10 boys compete in dens. There was also an open class where parents or siblings could make and race a car. Each den that raced was awarded a first, second or third place derby medal. Then the pack awarded a first and second place trophy for overall fastest times. Easton Hillman took first place and Kenny Hillman took a close second. Only one one-hundreth of a second was the distance between the two. 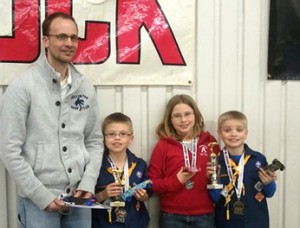 Ryan Hillman, Kenny Hillman, Mikayla Hillman and Easton Hillman pose for a photo with the trophies they won at a pinewood derby race recently.

Everyone who competed in any race was awarded a pinewood derby patch.