Dayton forum for tonight is canceled 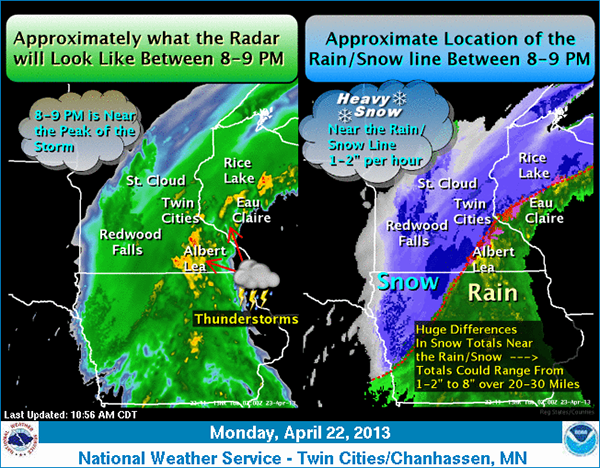 Snow and rain is expected this afternoon and evening. Snow will be heavy at times, but there will also be a sharp cut off in where the heavy snow falls and where more rain is expected.

Gov. Mark Dayton has canceled his plans to appear in Albert Lea tonight due to inclement weather.

This message came from the Governor’s Office: “This evening’s Meeting with Mark has been postponed due to the incoming winter storm. A new date for the event will be announced as soon as it has been scheduled.

The Twin Cities, Mankato, Duluth are in a winter storm warning, issued by the National Weather Service. Faribault County, to the west of Freeborn County, and Dodge and Steele counties, to the north, are in a winter weather advisory.

Freeborn County is in a hazardous weather advisory and is expected to get a thunderstorm this evening that also produces snow, but less than an inch.

The National Weather Service’s Chanhassen bureau says: “Precipitation will taper off late tonight as the system heads east. Snowfall amounts of 6 to 9 inches are forecast within the winter storm warning area, and 3 to 6 inches are expected with the winter weather advisory.”