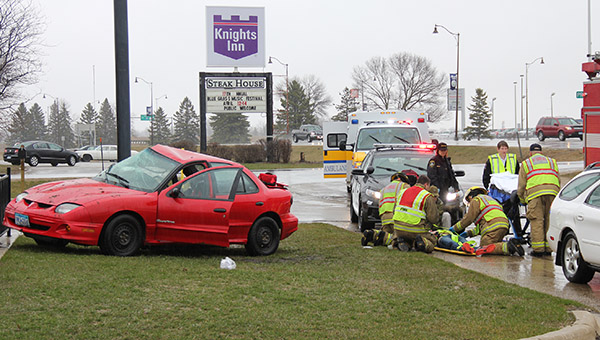 Emergency medical technicians assist the injured driver of a Pontiac Sunbird on a wet and rainy Monday in front of Taco John’s at the corner of Main Street and Prospect Avenue in Albert Lea. — Tim Engstrom/Albert Lea Tribune

The driver of a Pontiac Sunbird was severely injured Monday afternoon as a storm delivered wind and cold rain to Albert Lea.

A westbound semi was waiting to turn south from East Main Street onto Prospect Avenue, which apparently blocked the view of the driver of the Sunbird, according to the Albert Lea Police Department. This prevented the driver from seeing a westbound Dodge Durango.

The two collided on East Main Street near the junction with Prospect Avenue sometime after 3:30 p.m. The Durango remained on East Main, while the Sunbird coasted toward the outside seating area of Taco John’s. However, it stopped inches away from the restaurant’s fence.

The Albert Lea police were investigating this crash as of press time. More details will be available by the Wednesday edition.

There was a second crash Monday at 3:41 p.m. at Bridge Avenue and Pilot Road, with one woman taken away by an ambulance.

Jody Newman, 42, was driving a 2008 Toyota Prius northbound on Bridge and couldn’t stop in time to avoid a 2002 Pontiac Bonneville SSEi that was stopped to turn west on Pilot Road. The Pontiac’s driver was Debra Hall, 54, according to the Police Department.

An ambulance transported Newman away following the crash, the police report states.