‘Energy of the moment’ 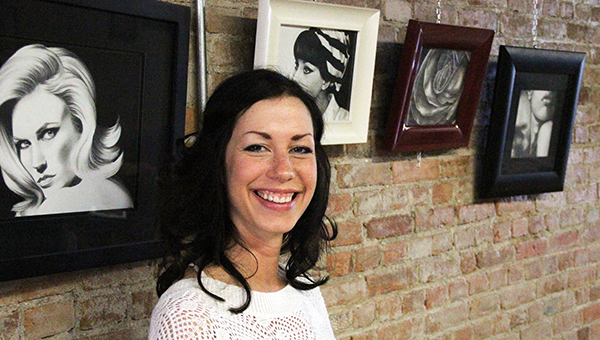 Artist Angie Hoffman smiles Thursday in front of pencil drawings she has hanging up at Prairie Wind Coffee in downtown Albert Lea. The image to the left is a portrait of January Jones, an actress of the TV show “Mad Men.” –Tim Engstrom/Albert Lea Tribune

An Albert Lea artist is drawing a commissioned portrait for the daughter of country music legend Johnny Cash. In fact, it is her third one.

Angie Hoffman, who turns 29 next month, is penciling a rendition of Cash’s great-grandson for Cindy Cash. The daughter of the singer of “Folsom Prison Blues,” “Ring of Fire” and “Walk the Line” has purchased two previous drawings from Hoffman and has commissioned her to do another after the one of Julian.

She said she loves the challenge of doing faces. She draws by looking at photographs and using grids to recreate them segment-by-segment. She often starts with an outline of the head or body.

Hoffman is the daughter of Kent and Cathy Otterman and grew up in rural Glenville. She has been married to property manager and broker Robert Hoffman since July 2009. Together, they own Complete Realty. She is the office manager. 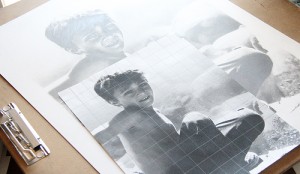 Angie Hoffman is working on this portrait of Johnny Cash’s great-grandson. The bottom image is a black-and-white photograph, while the top is the unfinished portrait.

She said she has been drawing her entire life and said she started to realize she was good about eight years ago following a drawing she made of actress Angelina Jolie. For about three years she was drawing for fun.

Hoffman became a sales representative at the Albert Lea Tribune in April 2007, but she also did some work on the editorial side for the Tribune’s former magazine, Southern Minnesota. For one story, she interviewed a Virginia man named David Venne, who ran an online art store. He was impressed and placed her art on the website.

Cindy Cash ordered a penciled portrait she made. Venne put the two women in touch with each other, and they began to email back and forth. She ordered two more: A redrawing of the original, plus one of Cindy Cash with her father. They maintain a good relationship to this day. After the portrait of the great-grandson, Hoffman plans to draw an image of Cindy with a crow, a black bird the Man in Black loved.

Hoffman’s first commissioned piece was a wife hugging her husband. She sold that for $90. Today, her artwork’s lowest price range is $200 and the upper end is $500. Several of her pieces hang at Prairie Wind Coffee in downtown Albert Lea. She sold her personal artwork in 2011 at the United Way of Freeborn County’s annual wine-tasting gala.

People discover her art through her website, angiehoffmanartist.com, and through her husband’s Facebook page. He is quick to promote her work.

She aims to do a mix of art she creates for fun and commissioned work, she said. She left the Tribune at the end of August and has more time for art. She said she has done about 30 commissioned pieces of art and presently is working on other requested pieces besides the ones for Cindy Cash.

She has taken no classes and has learned her skills alone. Her pencil drawings aim to be as real as possible, but her oil paintings are abstract, she said. She wouldn’t consider taking drawing classes but might consider painting classes, mainly to learn techniques. She has dabbled in charcoal and watercolor, too.

“I tend to be better when I teach myself,” Hoffman said.

She likes to draw flowers, shoes, birds and celebrities. She has drawn Jolie, Cash, Jennifer Aniston, January Jones and Sofia Loren. She wants to draw Audrey Hepburn and Elizabeth Taylor.

Hoffman draws in her studio, an unfinished bathroom, on the second floor of her home at 709 W. Fountain St. She likes to listen to music, such as Daft Punk, while making art but sometimes listens to speeches over YouTube, things like mind-bending quantum physics. She enjoys the business she shares with her husband and occasionally going to 112 on Broadway with him.

She wants to make art, but she also wants to keep it enjoyable. She didn’t make any art in 2012.