Melissa DiBenedetto of Albert Lea, Camron Harmon of Annandale and Russell and Barb Sorum of Albert Lea announce the engagement of their children Elizabeth Ann Harmon and Adam Edward Sorum. 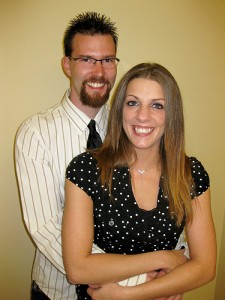 The bride is a 2007 graduate of Lake Mills High School and a 2012 graduate of Riverland Community College with an associate degree in applied science. She is pursuing a registered nurse degree. She is employed at the Good Samaritan Society in Albert Lea.

The groom is a 2005 graduate of Albert Lea High School and is employed at Deer Creek Construction in southern Minnesota and northern Iowa.

The bride’s grandparents are Leslie and Stephanie Harmon of Albert Lea and the late Grace DiBenedetto of New Orleans, La.

The groom’s grandparents are Paul and the late Nancy Sorum of Glenville and the late Ardus Jergenson of Albert Lea.

An April 20, 2013, wedding is planned at Round Prairie Lutheran Church in rural Glenville.