On Feb. 5 the Manufacturing Institute along with the Society of Manufacturing Engineers recognized 122 women at the National Museum of Women in the Arts in Washington, D.C., as the recipients of the first annual Women in Manufacturing STEP (science, technology, engineering and production) awards. Among the 122 women who were recognized was Heather Olson of Wells. Olson is the daughter of Susie Jahnke of Wells and Dick Olson of Hayward. 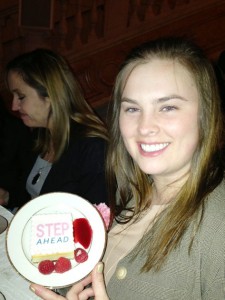 Heather Olson of Wells was recognized at the National Museum of Women in the Arts on Feb. 5 as a recipient of the first annual Women in Manufacturing STEP award. — Submitted

Olson has been working within the production and manufacturing industry for nine years. She was nominated by her previous employer, Incertec, a plating facility in Fridley. At Incertec, Olson was the environmental health and safety coordinator. She successfully implemented employee assessment surveys into on-going training. In less that a year, Olson became the go-to employee safety and training resource at the specialty plating solution firm.

The STEP awards are a part of the larger STEP Ahead initiative launched to examine and promote the role of women in the manufacturing industry through recognition, research and best practices for attracting, advancing and retaining strong female talent.