From righty to lefty 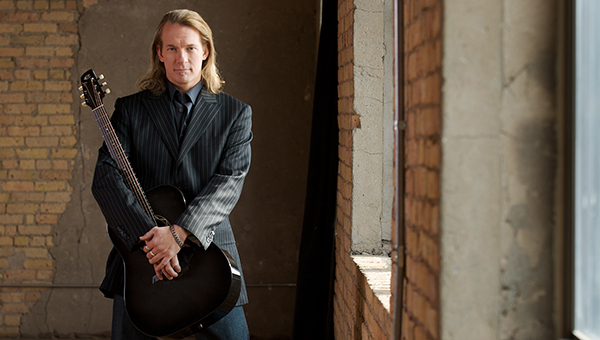 Billy McLaughlin stands with his guitar which he plays left handed. He began his career playing right handed but was forced to switch due to focal dystonia. — Ryan Taylor

Billy McLaughlin, an acoustic guitarist who plays in Albert Lea tonight, was diagnosed with focal dystonia.

The neuromuscular disorder caused and is still causing involuntary muscle spasms and contractions in McLaughlin’s right hand, he said. This presents a huge hurdle for a musician who plays technical passages with rhythm, harmony and melody on one instrument simultaneously.

The disorder took hold after McLaughlin had already achieved substantial success. His first release with Virgin Records peaked at No. 7 on the Billboard Charts, and he toured the globe.

However, the symptoms worsened, and McLaughlin couldn’t play all of his repertoire, he said. 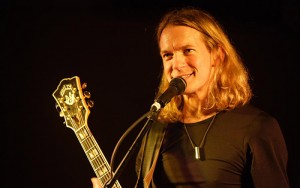 “It was a bizarre position to find myself in,” McLaughlin said.

McLaughlin’s career as a guitarist was threatened, but he kept a positive attitude.

A major change was required for McLaughlin to keep playing guitar: He needed to switch hands. The righty started his journey to become a lefty.

“Some people thought I was out of my mind to play left-handed,” McLaughlin said. “It’s a long process, and it’s ongoing.

“Whether you paint or dance or play music, you never get to the finish line. It’s the pursuit of beauty and a connection with your audience that keeps you getting up to do more.”

In addition to switching hands, McLaughlin has pioneered a style of tapping on the guitar’s fretboard with both hands.

“The tapping pieces are what I’ve focused on in the second half of my career,” he said. “I’ve been doing it for a long time, and thank goodness I developed that style. I love what the guitar can do. It’s a very simple but expressive instrument.”

McLaughlin has released 15 solo albums. He is a Minnesota native who lives in White Bear Lake. To study his craft, he went to the University of Southern California. Now, he’s glad to be back.

“When you’re pursuing your dreams, you never know where you’re going to end up,” he said. “After being in California for six years, I realized it wasn’t where I wanted to spend the rest of my life. Once a Minnesotan — always a Minnesotan.”

McLaughlin is now on a tour with 17 of 18 stops in Minnesota. He said he’s excited to play at the Lighthouse Event Center, and that he has played on multiple occasions for owners Merle and Celeste Krause.

“Merle and Celeste have been a home away from home for me,” McLaughlin said. “It’s been a great destination for me in southern Minnesota.”

Tickets are available at Marshall Street Music, Hy-Vee and Stadheim Jewlers in Albert Lea, and Coffee House in Austin. McLaughlin’s solo concert begins at 7:30 p.m. today. Tickets are $15 in advance and $20 at the door.