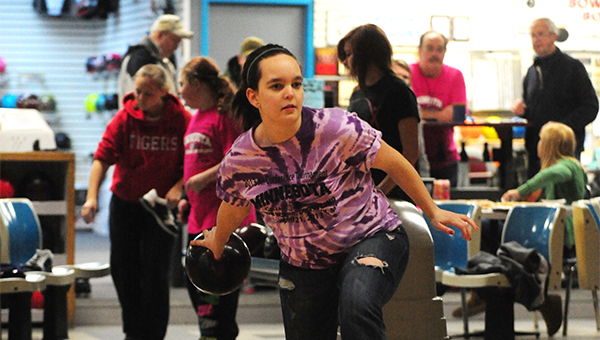 Team plays role of Cinderella at tournament in Fergus Falls

“It’s intense with all the people behind you,” he said. “There was hollering after every single shot, and that went on all day long.”

Kaiser planned on a rebuilding season with only three returning starters from last year’s state championship team that led the state with a game average of 180.

“We’ve brought up some younger bowlers, and we wanted to make it back to the state tournament,” Kaiser said. “But we didn’t know if we were actually going to get there.” 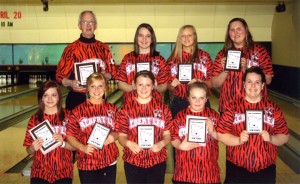 Albert Lea qualified for state, and even made it past pool play. Kaiser explained that the 16 state-qualifying teams were separated into two pools. Each team bowled 14 games. The top three teams in each pool qualified for the eight-team championship bracket. Albert Lea didn’t make the top three in Pool A, but two wild-card teams were chosen to fill out the bracket. Rosemount/Hastings took the first wild-card slot by knocking down 2,409 pins. Albert Lea knocked down 2,365 pins to secure the final spot.

“We just slid under the wire,” Kaiser said. “Our goal was to make the first cut to get to eight teams, and we did that.”

In the first round of bracket play, Albert Lea played the role of underdog against the only undefeated team in the state: Mankato East.

Mankato East is a conference foe that defeated Albert Lea during the regular season.

The Albert Lea girls bowled so well they even surprised themselves. After sneaking into the state tournament with a third-place finish in the Southern Conference and a regular-season record of 6-4, Albert Lea took down Mankato East to qualify for the final four of Girls’ Minnesota High School Bowling.

“I was really surprised,” junior Brianna Oftedahl said. “I almost made other plans, because I didn’t think we’d make it.”

In the second round of the tournament, Albert Lea lost to Burnsville, the eventual state champions. Albert Lea earned fourth place after losing the third-place game to Apple Valley.

A key for the season was being receptive to instruction, Kaiser said.

“They pay attention,” he said. “I think that’s why our teams are as good as they are. It’s nice to let them know why we’re doing what we’re doing, and what I expect.”

The girls found success after coming together as a team, Oftedahl said.

“We jelled more,” she said. “After a while, we weren’t like awkward penguins just waddling around out there.”

This season was the Girls’ Minnesota High School Bowling league’s third season of operation. The league has nearly doubled since its inception three years ago. Albert Lea took second place out of 23 teams in 2011, first out of 33 teams in 2012 and fourth out of 39 teams this year.

Albert Lea girls’ bowling is not a sanctioned Minnesota State High School League activity. It is administered by the Bowling Proprietors Association of Minnesota.