Albert Lea’s Green Lea Golf Course has been recognized in the Star Tribune as the fifth best course in Southeast Minnesota. 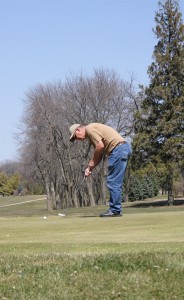 Derby Olson, a resident of Albert Lea and a member of the Green Lea Golf Club for the last 20 years takes a put Friday. — Micah Bader/Albert Lea Tribune

“It’s a nice award. It says something about our community and the support we’ve had over the years,” Green Lea owner Jeff Elseth said. “People like to play out here. It’s a real user-friendly course.”

The Star Tribune and Hacker’s Guide teamed up and presented a region-by-region list of the top 50 18-hole public golf courses in the state. The results were published in the newspaper’s golf tab on April 18.

The review listed Green Lea as “a true gem of a course.” It complimented nearly every aspect of Green Lea: the clubhouse and pro shop, the number of trees, the bunkers, the greens and even the length of the grass in the rough.

Two big projects have helped the course stay in peak condition after the Elseth family bought Green Lea in 1984 from its original owners, Elseth said.

“The course has a lot of low-lying areas that were subject to flooding on occasion with large rains,” Elseth said. “The extensive drainage system helped to dry out the course.”

Later, an automatic irrigation system was added to the fairways.

“It was previously a manual system, greens and tees only (were automatic),” Elseth said.

Those two improvements help the course withstand each weather extreme: drought and high moisture. This spring, the drainage system came into play not only for Green Lea’s members, but also for the Albert Lea boys’ golf team. The Tigers host seven meets at Green Lea.

“It’s split between Green Lea and Wedgewood (Cove),” Elseth said. “The boys’ team typically plays here, and the girls’ play out at Wedgewood. It works out well that way.

“Sometimes they flip back and forth. It’s just a real good working relationship with the high school.”

During Elseth’s tenure as owner, improvements have been made to the course and the clubhouse, but he said he’s constantly looking to make it better.

“We always take suggestions and comments, whatever they might be. We just try to put out the best product we can,” he said.