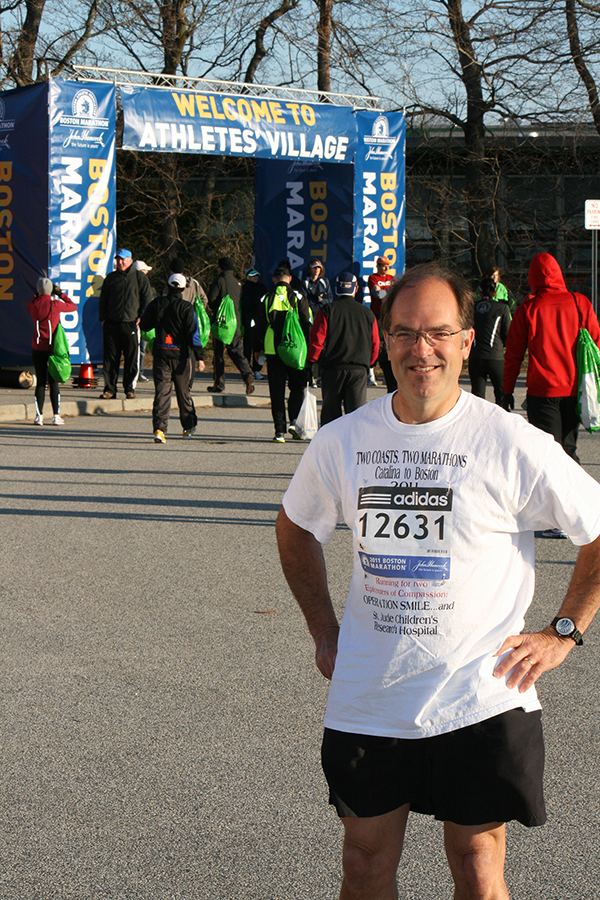 Rural Hayward resident Bryce Gaudian stands at the entrance to the Athletes’ Village near the start of the 2011 Boston Marathon in Hopkinton, Mass. — Submitted

An Albert Lea man corresponded with the race director of the Boston Marathon the day that the prestigious race was bombed. The terrorist attack killed three and injured scores of people and received international condemnation.

Bryce Gaudian, the development manager at Agilis Co., is an avid runner and has participated in 17 marathons. He collects running shirts for a nonprofit in Memphis called Youth Villages, which he said works with extremely behaviorally and emotionally distraught children. They have a running program with more than 250 children participating and needed running shirts.

Gaudian contacted race directors and asked for leftover shirts. Often there are more shirts created than can be handed out to paying participants. More than 8,000 shirts came in from all over the world.

A friend in Boston knew the race director, Dave McGillivray, and put the two in touch with each other. McGillivray told Gaudian that if the Boston Athletic Association, which runs the race, didn’t send him shirts, he would send his own.

“This is a reflection of what an extraordinary man the race director of the Boston Marathon is,” Gaudian said.

The Boston Athletic Association ended up sending 20 Boston Marathon shirts for the kids at Youth Villages.

After learning of the tragedy in Boston on Monday, Gaudian was compelled to send McGillivray an email message, encouraging him “to persevere through the chaos, sadness and devastating destruction to precious lives.”

McGillivray wrote in response: “As you may have guessed, I have been receiving hundreds and hundreds of personal emails and texts from all over the country and the world … What started out as a wonderful and flawless start of the race and continued to go smooth throughout the course turned into a horrific tragedy at the finish. I can’t stop thinking about all of the ‘hypothetical’ tabletop exercises we have done with this race year after year with our public safety partners and then to have this happen … We all feel so sorry for the innocent victims and their families. Even my young kids (8 and 7) were in the stands and witnessed this senseless act and are so shaken by it all. Thanks again for reaching out. Hundreds of issues now to sort through over the next few weeks and months, but we’ll persevere. Again, I appreciate your kind words. They help more than you know.”

Gaudian said he had several friends and business clients running Monday in the 117th Boston Marathon. He has interacted with many through social media, email or through other people and, as far as he knows, all are safe, he said, including a friend from Portland who was right beside one of the two bomb blasts and a client who finished second before the first bomb went off.

He called the bombings “unspeakable evil,” noting how the bombs were low to the ground, which maimed the legs of many runners.

“Fortunately, there are multitudes of kind and compassionate people who came to others needs in the midst of chaos,” he said. “The running community is an extraordinary lot.”

One of Gaudian’s friends in Tennessee sent him this message: “I’m sure we all know people who were running, and it was touch-and-go until they were all accounted for. I just think it is such a tragedy, but the running community will persevere. If the perpetrator’s intent was to intimidate, they picked the wrong group. We are the people who crank it up in the morning at 5 a.m. and choose to push ourselves in the cold, snow, rain and heat to the point of exhaustion. We do that not for a big sports contract, but for a T-shirt, for the love of the sport, and for the love of those who love the sport; people who others consider crazy. We are the most positive, driven people. We don’t intimidate easily. I will be in New York again this year to run the marathon. Mother Nature and terrorists won’t keep me away.”