Longtime local dispatcher steps away from the radio, phones 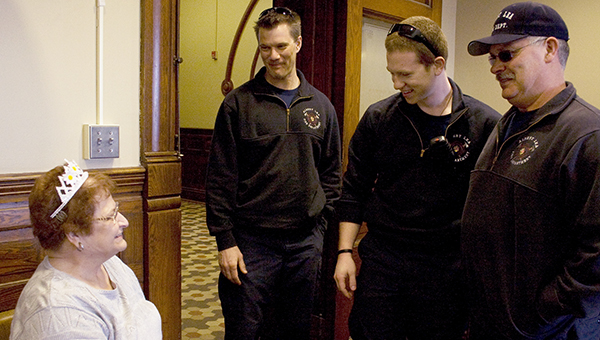 For 32 1/2 years, Barb Whiteaker has been a mainstay for Albert Lea and Freeborn County law enforcement and emergency responders.

On Friday, Whiteaker retired after what she described as a stressful-yet-rewarding career as an emergency dispatcher.

“It’s surreal,” she said. “I just can’t believe it’s been that many years.”

Whiteaker said she began in 1980 under then Albert Lea Police Department Chief Clarence Ayers. She said this was prior to the installation of the emergency 911 system, and when she began she used just a single computer for the position, a far cry from the five monitors dispatchers use now.

She said technology has seen major upgrades in her more than 30 years in the position, and dispatchers now have many more capabilities than they did in the past.

“She’s seen it all,” said Albert Lea Public Safety Director Dwaine Winkels, who noted that Whiteaker was his first night dispatcher after he started.

He called it “an amazing feat” that Whiteaker was able to serve in the position for the time she has.

“That job can be every bit as stressful as an officer’s,” he said. “Most dispatchers, because of stress in the job or family life, they leave.”

Winkels said Whiteaker treated people who called in like they were family and said she was always a dedicated employee.

Whiteaker said though the job has been successful she tried not to dwell on the more difficult calls she has had to deal with.

“You have to learn to divorce yourself from your job and your private life,” she said.

“I enjoyed my job. I enjoyed helping the people of Albert Lea and Freeborn County.”

A retirement party was held in Whiteaker’s honor Friday in the Freeborn County Courthouse where co-workers thanked and congratulated her for her service.

Whiteaker said after her retirement, she plans to spend some time with her husband, Albert “Peanuts” Whiteaker, at Elysian Lake.