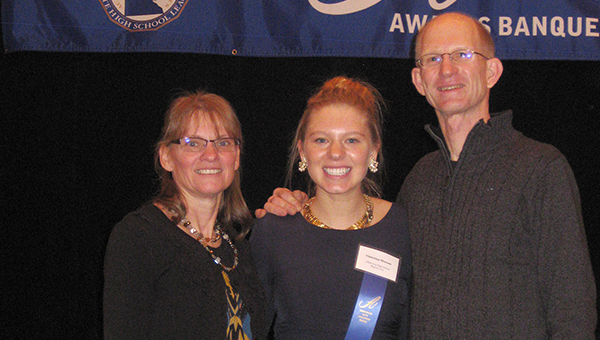 Albert Lea student-athlete, Christina Monson was presented with the Section 1AA Triple A Award at the Minnesota High School League banquet on March 24. She was also honored at halftime of the boys’ 1AA state basketball tournament finals.

Monson was the female chosen to represent Section 1AA in the academics, arts, and athletics award program.

Nick Brehmer from Austin was chosen as the male representative for Section 1AA.

Established in 1988, the award is sponsored by the MSHSL. The award is given to high school seniors who have a grade point average of a B or better and participate in league-sponsored athletic and fine arts activities.

During her high school career, Monson has maintained straight A’s and has excelled in a variety of college credit or CIS courses. She has earned a grade-point average higher than 4.0.

In track and field, Monson has won eight conference titles, five section titles, and has participated in the MSHSL state event for the past four years in both the 1,600-meter run and the 3,200-meter run. She was the 1,600-meter champ in 2011 and has been an All-State winner each year.

As a freshman, Monson also played basketball and was a member of the C, B and varsity squads throughout the season.

Beyond athletics, Monson also has been involved in choir, show choir, solo ensemble, Business Professionals of America, and she has assisted with the sound and lighting for one act play.