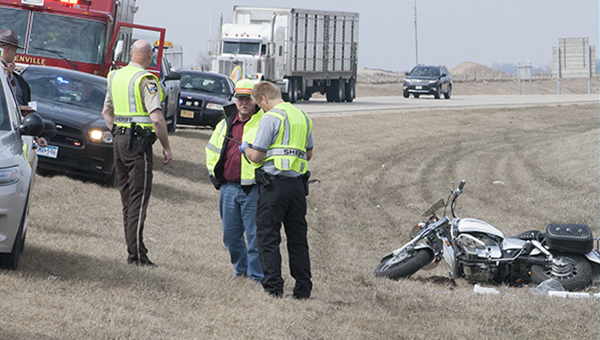 An Austin man was airlifted to St. Marys Hospital Monday afternoon after he reportedly crashed his motorcycle on Interstate 35 about three miles north of the Iowa border.

James H. Grunewald, 62, of Austin, was riding a 2001 Honda Road Star northbound when he lost control, entered the median, and was ultimately thrown from his motorcycle, according to the Minnesota State Patrol.

Grunewald was reportedly seriously injured. He was not wearing a helmet, the State Patrol report states.

The crash took place at 2:24 p.m. north of the curve in the road near Round Prairie Lutheran Church.

The Minnesota Department of Transportation closed the southbound lanes of the interstate one mile south of Freeborn County 13 before 3 p.m. to allow a Mayo One helicopter to land and reopened to one lane at 3:36 p.m.

The remaining lane was reopened by 5 p.m.

The State Patrol report stated no alcohol was detected.