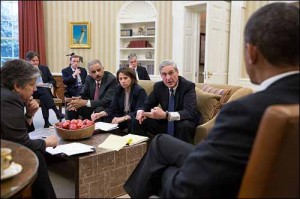 Vice President Joe Biden is also attending the briefing in the White House Situation Room. Secretary of State John Kerry, Homeland Security Secretary Janet Napolitano and CIA director John Brennan are among the other top officials in the briefing.

The bombing suspects were identified by law enforcement officials as brothers from a Russian region near Chechnya. One suspect is dead and a second remains at large.

Thousands of officers have swarmed the streets in a manhunt that all but paralyzed the Boston area.