Old motors will have a home

FREEBORN – This small town will open a building to the public that has been in the works for the last two years.

Through fundraising the Freeborn Area Heritage Society raised $41,000 to build a display for the town’s first fire truck, a 1946 Ford, which has been in storage, and a 1926 Ford Model T that was donated in 2010 by Dixon Smith in memory of his wife, Jane Smith of Freeborn. 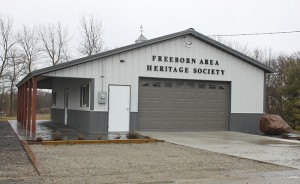 The Freeborn Area Heritage Society will open the doors on its new building May 5. The building will house a 1926 Ford Model T and the town’s first fire truck, a 1946 Ford. –Submitted

“In a town of 300 people we did very very well,” Dr. Al Mendenhall, president of the Freeborn Area Heritage Society, said about the fundraising.

Mendenhall said a lot of the money came from small donors, but there were four large donors including Smith, Pride Builders of Freeborn, Canon Valley Communications Foundations and Kevin Savick, a former Freeborn resident who died in 2011 who made a $23,000 donation to the Heritage Society.

What started as an idea to build a garage for the car quickly expanded to a building that includes a bathroom, heated floors, flower garden and strand board walls so memorabilia can be hung on display. 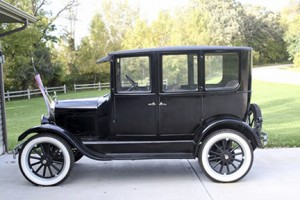 This 1926 Ford Model T will be on display at the new building built at the Freeborn Area Heritage Society.

Some items have already been planned for display.

One of the items is a plaque signifying that the Camp Courage corn drive originated in Freeborn.

The corn drive is a fundraiser conducted by FFA chapters and the proceeds are donated to Camp Courage, a summer camp for children and adults with disabilities.

Other memorabilia planned for display are trophies and photos from Freeborn High School.

The grand opening of the new building will be May 5. In conjunction, a pancake breakfast will be served from 9 a.m. to 1 p.m. at the Freeborn American Legion.