Lyle-Pacelli grad Cody Meyer is rediscovering his love for baseball.

Meyer, who initially was aiming to play basketball after high school, is now entering his second year as a pitcher for the Riverland Community College baseball team. 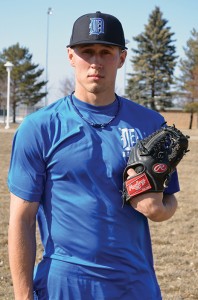 Lyle-Pacelli grad Cody Meyer is setting his sights on a solid season this spring for the Blue Devils. — Rocky Hulne/Austin Daily Herlad

He pitched six and one-thirds innings of no-hit ball in his first start this season as he struck out six in a win over Division II Avery Point.

Meyer said he was nervous when he got back on the mound last season, but he’s feeling much more comfortable this season.

“I had a lot to work on,” Meyer said. “I didn’t know a lot of the little things coming in. Our pitching coach Brian Voigt has been phenomenal. I’ve learned so much these two years, and it’s helped me tremendously.”

Meyer always had a strong fast ball, but the biggest nemesis in his career has been control. This year, he’s focusing on keeping the ball over the plate and trusting his defense.

“You just have to fill the zone up and don’t be afraid if they’re going to hit it,” Meyer said. “If you get ahead in the count, it makes it a lot easier.”

Voigt, a Southland grad, who is in his first year as RCC’s pitching coach after playing at Division II Augustana University in Sioux Falls for two years, played against Meyer in high school and now he’s helping his former opponent develop.

“He’s always been one of the hardest workers. He’s a coach’s dream, and everything’s yes. It’s never a no and he’s willing to put in the extra work,” Voigt said. “In the first game he threw magnificent. It was a great game, and his curve ball looks pretty good when he throws it for a strike.”

Meyer also remembers playing against Voigt and he said he’s now learning a lot from the former Rebel ace.

“It’s a small world,” Meyer said. “He knows what he’s talking about.”

Meyer said he looks forward to the competition of trying to get innings on an RCC squad that is loaded with quality hurlers and is off to an 8-3 start.

He also likes the attitude of his teammates.

“Everybody here is for a reason and everybody knows and loves the game,” Meyer, who plans on playing for the Austin Blue Sox again this summer, said. “We have a lot of fun off the field and we bring it on the field.”