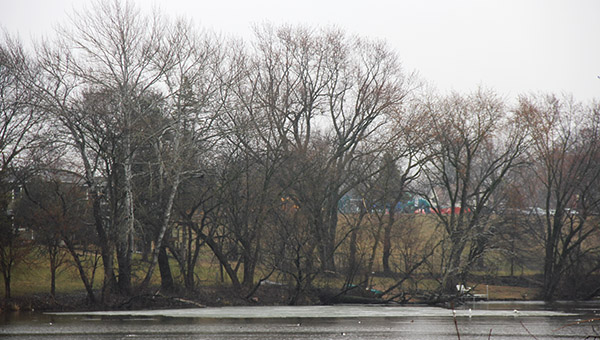 The last remnant of ice on Fountain Lake is in Dane Bay, near homes accessed by Botsford Avenue. — Tim Engstrom/Albert Lea Tribune

Much of Minnesota received more snow as part of spring that maintains wintry qualities. Albert Leans awoke to an inch of snow on the ground, with a coating of sleet and slush underneath. And that was after getting nearly a half inch of rain.

Ice was still in existence on Dane Bay of Fountain Lake. The record for ice out on the lake, after 100 years of record keeping, is April 30, set in 1953.

No schools in the Albert Lea area decided to delay or cancel classes. However, up to 10 inches of new snow in northwestern Wisconsin and northeastern Minnesota closed schools and making travel challenging. Forecasters say more spring-like temperatures are on the way.

Another wintry blast kept snow plow drivers busy and snowblowers humming in Wisconsin and Minnesota. Hayward, Wis., is dealing with another 10 inches of snow. Schools in Hayward, Ashland, Bayfield and Drummond are closed Tuesday.

In Minnesota, Duluth is also dealing with about 10 inches of new snow. The National Weather Service said temperatures near 60 should cause some fast melting this weekend. Forecasters say it’s the latest this much snow has been on the ground at the Twin Ports since records have been kept.