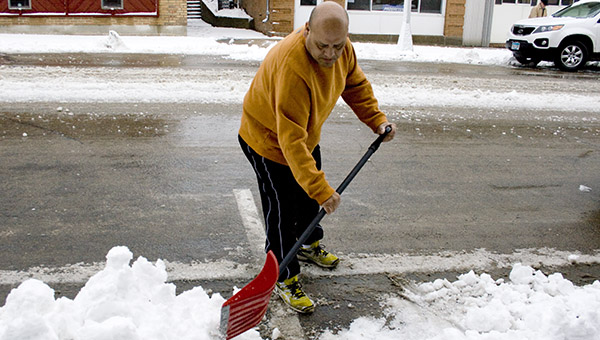 The ice from freezing rain that struck western Minnesota and knocked out power for thousands left the Albert Lea area alone.

Nevertheless, the 1 1/2 inches of snow and sleet that the city received overnight did leave roads slippery for morning commuters. Snowplows were out early clearing the way.

A crash was reported this morning on Interstate 35 between the Geneva and Ellendale exits. The Minnesota Department of Transportation said travel was not advised on roads west of Alden and Waseca. It said conditions in southern Minnesota were difficult.

Forecasters say snow and sleet will continue to fall throughout today as a winter storm warning remains in effect until 7 p.m. Additional daytime accumulation is expected to be an inch, with another inch this evening.

An ice storm warning was in effect for Austin, Rochester and southeastern Minnesota; however, reports indicate they received snow and sleet but not the dreaded ice. That could still come during today, according to local forecasts.

The slow-moving storm will slide into Wisconsin today and tonight.

Some areas of western Minnesota reported anywhere from 3 to 9 inches of snow so far. Snowfall totals in South Dakota were 3 to 8 inches.

Forecasters expect snow totals will range from 3 to 5 inches in the southeast metro area to 6 to 8 inches in some western suburbs Thursday. Up to a foot of snow is expected to fall in west central and central Minnesota.

Gov. Mark Dayton called out the state National Guard Wednesday to help residents of southern Minnesota after an ice storm knocked out power to thousands of people and another storm threatened to dump several inches of wet snow by today.

Dayton said the storms were taxing the resources of local and county governments and that conditions were expected to worsen. He issued an executive order activating the Guard.

The snowstorm that was baring down on the state followed one that brought about eight-tenths of an inch of freezing rain to southwestern Minnesota.

The town of Worthington was using backup diesel generators to power sections of the city at a time, public utilities manager Scott Hain told Minnesota Public Radio. Roughly a quarter to a third of the city of about 13,000 people was without power at any given time, he said.

“With the generation that we have available, we are conducting rolling blackouts through the community,” Hain said. “From what we’re hearing from the folks that own the transmission that’s down right now, is we expect that we’ll be operating under this same scenario at least through the rest of today and possibly into tomorrow as well.”

Rachel Kruger, director of emergency services for the American Red Cross of South Central Minnesota, said that both Rock and Nobles counties were about 90 percent without power.

The Nobles County Government Center closed due to the power outages, while the local hospital was operating on generator power, as was a nursing home in the town of Hills, the state Department of Public Safety said. The National Guard armory in Luverne opened to house 28 juveniles and seven staff members from a detention center that lost power, Army Master Sgt. Matthew R. Pease said.

Twenty assisted-living residents from Tuff Memorial Home in Hills were moved to the center’s 50-bed nursing home after the storm knocked out power. The nursing home has placed cots and recliners in the chapel for the extra residents, maintenance supervisor Stan Van Wyhe said.

Van Wyhe said up to 70 people may be staying at the nursing home Wednesday night, but some residents might be picked up by relatives who have electricity. He said there is plenty of food and medication on hand.

The Radio Works group of stations in Worthington lost one of its three towers due to the ice storm. General manager Chad Cummings said the top three-fourths of the tower fell to the ground Wednesday morning. There were no injuries, no damage to buildings or even the fence surrounding the tower. He said they got KWOA-AM and KITN-FM back on the air, but it might take another day or two for KUSQ-FM and KZTP-FM. Getting power to the remaining transmitters has been the main challenge, he said.

“We could see power outages of 48 hours is what they’re telling us,” Cummings said.

Worthington city employees were hard at work clearing the streets of fallen branches and debris and preparing for more snow.

Elsewhere across southern Minnesota, winter-weary residents woke up to 1 to 2 inches of slushy snow Wednesday as a preview to the storm to come. Over a dozen rural school districts started classes two hours late and a few districts canceled classes due to slippery roads.

“If we get anywhere near the amount of snow we’re expecting, it’s going to be a pretty intense situation. We’re as ready as we can be for snow, given the situation,” Worthington public works director Jim Eulberg said. “The priority is getting the branches out of the street because it’s going to be difficult to plow if there are branches lying in the streets.”

No matter how much snow falls, Minneapolis won’t declare a snow emergency. A city ordinance prohibits that after April 1, but city officials promised that crews will be out to treat and clear streets.