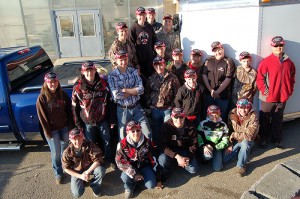 The Alden-Conger Supermileage team took this group photo on April 2 before leaving for Houston, Texas, where they took part in the Shell Eco-marathon. The group competed against high school teams, universities and colleges. In 2012, the team placed first in the alternative diesel prototype categoy, setting a new record of 674 miles per gallon. The team of 20 students returned this morning. –Photo courtesy Alden Advance