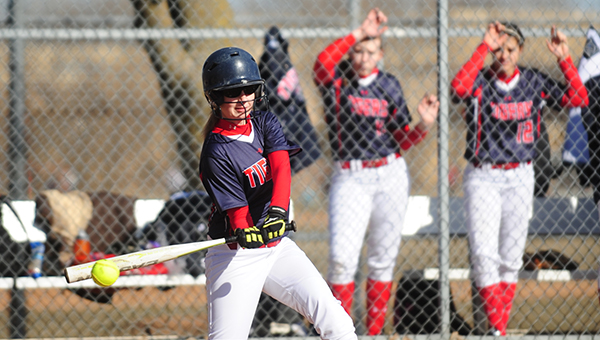 Junior second baseman Lindsay Reim swings at a pitch for Albert Lea. The Tigers had a tough time in the batter’s box against the Rockets mustering one hit in game one. But in game two of the doubleheader, Albert Lea earned four runs. — Micah Bader/Albert Lea Tribune

The game kicked off the Rockets’ season as well, since their first two games were postponed.

Rochester John Marshall swept both games from the Tigers 11-0 and 24-4.

In game one, Haley Harms started at pitcher for the Tigers. She struck out five of 27 batters and allowed eight earned runs. 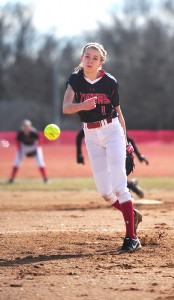 Albert Lea’s starting pitcher Haley Harms hurls a pitch toward catcher Dominique Villarreal in game one of a doubleheader against Rochester John Marshall. Harms pitched the majority of both games for the Tigers. — Micah Bader/Albert Lea Tribune

Amber Prow of Rochester John Marshall struck out 11 of 16 Albert Lea batters to lead her squad.

Prow’s no-hitter was spoiled in the bottom of the fifth inning by Tigers’ junior infielder Caycee Gilbertson.

“Caycee had a nice solid hit,” Albert Lea head coach Dan Harms said. “But, we didn’t swing the bat very well in the first game. She (Prow) throws pretty well, but we’re better than that.”

In game two, the Tiger bats came to life. The Rockets scored five runs in the first inning, but the Tigers countered with three runs.

At the end of the fourth inning, Albert Lea trailed 9-14.

However, Rochester John Marshall exploded in the fourth and fifth innings with a combined 14 runs.

Kassie Hardies started the second game at pitcher. She threw for 2/3 of an inning before Harms took the pitching circle.

Next the Tigers will play in a four-team tournament at Saint Clair Saturday.

In the first round, Albert Lea will play Byron at 11 a.m.

The winner will play the victor of the other first-round game (Triton at Saint Clair) in the championship at 3 p.m.

The third-place game will be at 1 p.m.

“We had a tough go of it tonight, but hopefully we can redeem ourselves this weekend,” he said.