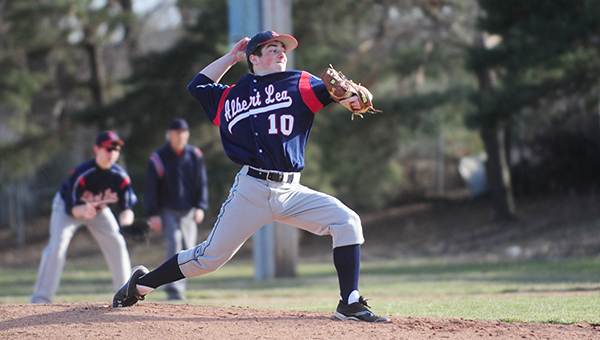 “The kids rose to the challenge,” Albert Lea head coach Joe Sczublewski said. “This was a nice win for us.” 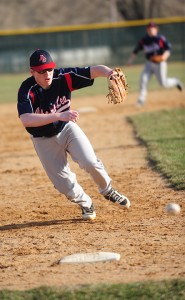 Derek Burkard of Albert Lea prepares to lunge for a ball hit down the third base line. The ball snuck past Burkard, but it was deemed foul. — Micah Bader/Albert Lea Tribune

Rochester John Marshall jumped to a 1-run lead in the third inning, but Albert Lea fought back in the fourth.

Makael Lunning started a positive trend for the Tigers with a lead-off single. Lunning found his way back to home plate with an RBI single by Wyatt Paulsen.

The score was tied at one headed into the fifth inning. Albert Lea pitcher Johnathan Fleek held the Rockets’ batting order in check in the top of the inning, and the Tigers exploded with three runs in the bottom of the inning.

Albert Lea’s Luke Arnold started the fireworks with a single to center field. The next batter was Dylan See-Rockers. He earned a bunt single and advanced Arnold to second base. Fleek followed See-Rockers’ at-bat with an RBI single. The next Albert Lea batter, Zach Bordewick, hit a sacrifice fly to score See-Rockers.

Fleek scored the Tigers third run of the inning on a sacrifice fly to center field by Lucas Hansen.

Neither team scored in the sixth inning.

The Rockets made a final effort to rally in the seventh inning, but exceptional defense by Albert Lea held them to only one run.

For the first out of the inning, Paulson stopped just short of the warning track in right field to catch a pop fly.

Fleek continued a dominant performance on the mound by striking out a Rochester John Marshall batter for the second out.

The Rockets scored one run with two outs, but Albert Lea made the final out shortly thereafter.

Fleek pitched all seven innings. He struck out five batters and allowed four hits and one earned run.

“He’s been throwing year ’round. His arm is as strong as anyone’s,” Sczublewski said. “He battles out there, and the team plays hard behind him.”

Fleek said he was satisfied with his performance on the mound.

“I thought I pitched well for the first game of the year,” he said. “They (the outfield) made a lot of plays to back me up.”

“We made some nice plays and our outfield played outstanding,” he said. “Makael made that diving catch with two on and two out in the third inning. Paulson made a tough catch in the corner and See-Rockers made a nice catch in the first inning.”

Three Tigers batted .666 for the game: See-Rockers, Lunning and Paulsen — and that was against the Rockets’ ace pitcher: Janek Walker.

Earlier this week, Albert Lea took Winona to extra innings before the game was postponed.

“We’ve played two of what you’d call the favorites with returning people in Winona and J.M.,” Sczublewski said. “We’ve shown we can compete with them.”

The Tigers continue their conference tour today by hosting Rochester Mayo at 4 p.m.