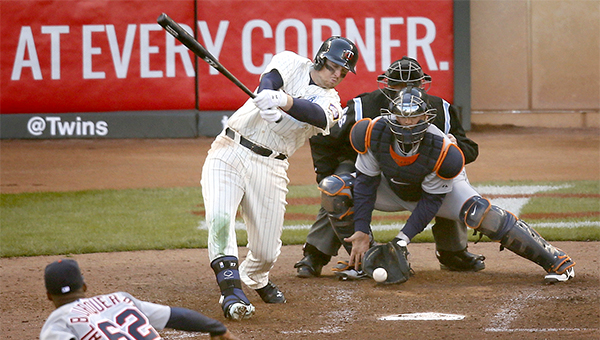 Minnesota’s Chris Parmelee strikes out with bases loaded during seventh inning action against the Detroit Tigers at Target Field on Monday, which was the first game of the regular season. — MCT

MINNEAPOLIS — The Minnesota Twins gave their frostbitten fans a reason to stay until the end.

Justin Verlander’s dominant start for the Detroit Tigers was too much to overcome on this cold opening day.

Verlander struck out seven over five shutout innings at frosty Target Field to send the defending American League champions past the Twins 4-2 on Monday afternoon.

With the gametime temperature at 35 degrees and the wind blowing at 17 mph, fans had to bundle up. But opening day is always a draw, as evidenced by the announced crowd of 38,282, a sellout by Twins guidelines.

Phil Coke got the last two outs for the first save by the Tigers’ closer committee. Prince Fielder, wearing a black ski hat covering on his head, had two hits and an RBI to help spoil Vance Worley’s first start for the Twins, who left 12 runners on, including the bases loaded in the seventh. They also struck out 12 times.

Tigers reliever Drew Smyly gave up a run on a wild pitch in the sixth inning and another on an RBI single by Ryan Doumit in the seventh. But Al Alburquerque struck out back-to-back batters to finish that inning and strand three men. In the sixth, Fielder made a slick scoop of Jhonny Peralta’s one-hop throw from the hole at shortstop to barely beat Wilkin Ramirez on an inning-ending grounder with two runners in scoring position.

Verlander was 0-1 in his previous five season openers. With his $180 million, seven-year contract that could keep the right-hander with the Tigers through 2020 only days old, Tigers manager Jim Leyland took the safe route by removing him after those five dominant innings.

Doubles by Joe Mauer and Justin Morneau were the only signs of resistance by the Twins, who haven’t beaten Verlander since April 27, 2010. He is 8-0 with a 1.71 ERA in nine starts during that span. The former AL MVP and Cy Young winner (1-0) threw 91 pitches, giving up three hits and two walks.

In conditions that favored the men on the mound over the players at the plate, Verlander struck out Twins rookie Aaron Hicks in each of the center fielder’s first three at-bats. Skipping Triple-A to face a pitcher like Verlander is a tough transition, even for the 14th overall pick from the 2008 draft. Hicks said he went through six hand-warmers during the game.

Hicks is one of a handful of enticing prospects the Twins are counting on for a turnaround from 96 and 99 losses the last two seasons. Most of the rest of them are pitchers still in the minors, with the Twins trying to revamp a rotation that had the third-worst ERA in the majors last year.

Worley (0-1) worked sleeveless — always his preference, because he sweats a lot — for his Twins debut and first AL appearance, completing six innings with eight hits, three runs and one walk. He struck out three and stayed poised after falling behind 3-0.

“It would’ve been nice to have that the first couple innings, but it was just a matter of getting comfortable out there,” said Worley, who threw 101 pitches.

The right-hander, acquired in the trade that sent speedy outfielder Ben Revere to Philadelphia, gave up a bouncing single to Torii Hunter on a hit-and-run in the first inning followed by another groundball that sneaked down the line for the RBI double by Fielder.

“He had some things go wrong, but he kept going out there and battling and gave us a good chance to win,” Mauer said.

Putting Mauer in the No. 2 spot in the batting order is what Gardenhire believes will give the Twins the best chance to win, an “ambush” style of offense, as the manager put it before the game. Mauer and Morneau are the only two players who were also in the opening day lineup in 2011.

“We need people to get on in front of ‘em, but that’s the way we’re going to roll,” Gardenhire said.

NOTES: The Twins played outside at Metropolitan Stadium for their home opener on April 14, 1962, when it was 33 degrees. Announced attendance that day was 8,363. … The gametime temperatures for the first three home openers at Target Field were 65, 63 and 45 degrees. … The Tigers have won 16 of their last 20 games at Target Field since Sept. 2, 2010, outscoring the Twins 117-81 in that stretch. … The Twins have lost five season openers in a row.