WATERTOWN, Mass. — The two suspects in the Boston Marathon bombing killed an MIT police officer and hurled explosives at police in a car chase and gun battle overnight that left one of them dead and his brother on the loose, authorities said Friday as thousands of officers swarmed the streets in a manhunt that all but paralyzed the Boston area. 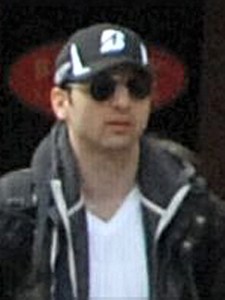 The suspects were identified by law enforcement officials and a family member as Dzhokhar and Tamerlan Tsarnaev, brothers from a Russian region near Chechnya, which has been plagued by an Islamic insurgency stemming from separatist wars.

Tamerlan Tsarnaev, known to the FBI as Suspect No. 1 and seen in surveillance footage in a black baseball cap, was killed in a gun battle with police in Massachusetts overnight, officials said. His 19-year-old brother — dubbed as Suspect No. 2 and seen wearing a white, backwards baseball cap in the images from Monday’s deadly bombing at the marathon finish line — escaped.

The law enforcement officials spoke on condition of anonymity because of the sensitivity of the ongoing investigation.

In Boston, authorities suspended all mass transit and urged close to a million people in all of Boston and some of its suburbs to stay indoors as they searched for the remaining suspect, a man Businesses were asked not to open Friday. People waiting at bus and subway stops were told to go home.

The endgame — at least for Suspect No. 1 — came just hours after the FBI released photos and video of the two young men at the marathon finish line and appealed to the public for help in identifying and capturing them. Tips came pouring in to the FBI immediately but exactly how authorities managed to close in on the two young men was not immediately disclosed.

The mens’ uncle, Ruslan Tsarni of Montgomery Village, Md., told The Associated Press that the men lived together near Boston and have been in the United States for about a decade. They traveled here together from the Russian region near Chechnya.

The White House said President Barack Obama was being briefed on developments overnight by Lisa Monaco, his assistant for homeland security and counterterrorism. 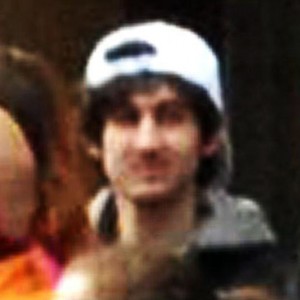 His brother, Dzhokhar A. Tsarnaev, 19, survived the fight and a chase. A manhunt is underway.

The suspects’ clashes with police began only a few hours after the FBI released photos and videos of the two young men, who were seen carrying backpacks as they mingled among marathon revelers. The bombings on Monday killed three people and wounded more than 180 others, and authorities revealed the images to enlist the public’s help finding the suspects.

The images released by the FBI depict two young men, each wearing a baseball cap, walking one behind the other near the finish line. Richard DesLauriers, FBI agent in charge in Boston, said the suspect in the white hat was seen setting down a bag at the site of the second of two deadly explosions.

Authorities said surveillance tape recorded late Thursday showed the suspect known for the white hat during a robbery of a convenience store in Cambridge, near the campus of MIT, where a university police officer was killed while responding to a report of a disturbance, said State Police Col Timothy Alben. The officer died of multiple gunshot wounds.

From there, authorities say, the two men carjacked a man in a Mercedes-Benz, keeping him with them in the car for half an hour before releasing him at a gas station in Cambridge. The man was not injured.

The search for the vehicle led to a chase that ended in Watertown, where authorities said the suspects threw explosive devices from the car and exchanged gunfire with police. A transit police officer was seriously injured during the chase, authorities said.

In Watertown, witnesses reported hearing multiple gunshots and explosions at about 1 a.m. Friday. Dozens of police officers and FBI agents were in the neighborhood and a helicopter circled overhead.

Watertown resident Christine Yajko said she was awakened at about 1:30 a.m. by a loud noise, began to walk to her kitchen and heard gunfire.

“I heard the explosion, so I stepped back from that area, then I went back out and heard a second one,” she said. “It was very loud. It shook the house a little.”

She said a police officer later knocked on her door and told her there was an undetonated improvised explosive device in the street and warned her to stay away from the windows.

“It was on the street, right near our kitchen window,” she said.

Yajko said she never saw the suspect who was on the loose and didn’t realize the violence was related to the marathon bombings until she turned on the TV and began watching what was happening outside her side door.

State police spokesman David Procopio said, “The incident in Watertown did involve what we believe to be explosive devices possibly, potentially, being used against the police officers.”

Boston cab driver Imran Saif said he was standing on a street corner at a police barricade across from a diner when he heard an explosion.

“I heard a loud boom and then a rapid succession of pop, pop, pop,” he said. “It sounded like automatic weapons. And then I heard the second explosion.”

He said he could smell something burning and advanced to check it out but area residents at their windows yelled at him, “Hey, it’s gunfire! Don’t go that way!”

Doctors at a Boston hospital where a suspect in the marathon bombings was taken and later died are saying they treated a man with a possible blast injury and multiple gunshot wounds.

MIT said right after the 10:30 p.m. shooting that police were sweeping the campus in Cambridge and urged people to remain indoors. They urged people urged to stay away from the Stata Center, a mixed-use building with faculty offices, classrooms and a common area.

The suspects’ images were released hours after President Barack Obama and first lady Michelle Obama attended an interfaith service in Boston to remember the dead and the wounded.

At the Cathedral of the Holy Cross, Obama saluted the resolve of the people of Boston and mocked the bombers as “these small, stunted individuals who would destroy instead of build and think somehow that makes them important.”

“We will find you,” he warned.

In the past, insurgents from Chechnya and neighboring restive provinces in the Caucasus have been involved in terror attacks in Moscow and other places in Russia.

Those raids included a raid in Moscow in October 2002 in which a group of Chechen militants took 800 people hostage and held them for two days before special forces stormed the building, killing all 41 Chechen hostage-takers. Also killed were 129 hostages, mostly from effects of narcotic gas Russian forces used to subdue the attackers.

Chechen insurgents also launched a 2004 hostage-taking raid in the southern Russian town of Beslan, where they took hundreds of hostages. The siege ended in a bloodbath two days later, with more than 330 people, about half of them children, killed.

Insurgents from Chechnya and other regions also have launched a long series of bombings in Moscow and other cities in Russia. An explosion at the international arrivals hall at Moscow’s Domodedovo airport in January 2011 killed at least 31 people and wounded more than 140.