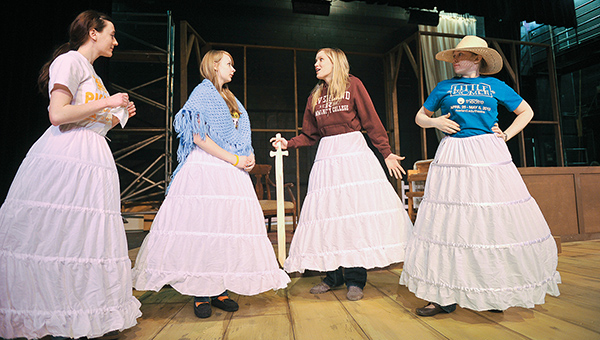 The Riverland Theatre Department will close out the 2012-13 season by bringing four beloved sisters to life on stage. 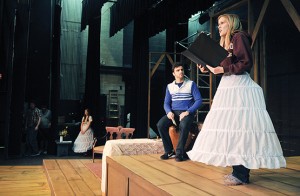 The story focuses on the March sisters — Jo, Meg, Amy and Beth — and their mother Marmee in Concord, Mass., while their father is away serving in the Union Army during the Civil War. Since the musical remains true to the story, Williams said it will be a treat for fans of the book.

“It think those people are going to love seeing the characters come to life on stage,” she said.

Even though the characters date back 150 years, Williams said many people still hold them dear.

“It’s still so easy to relate to these four young women,” she said.

But, she also urged people who haven’t read the book to come out, too, noting they’ll likely be converted to fans.

“It’s hard not to fall in love with them watching the show,” Williams said.

The musical debuted on Broadway in 2005, but it didn’t have a long run. The play has found more success in colleges and community theaters.

“It’s really kind of having an extended life,” Williams said.

Williams described “Little Women” as a wonderful story with wonderful music. She also said it’s an inspirational and hopeful story.

“It really ends on this uplifting and hopeful note,” she said.

For Williams, the play is a chance to direct a story she has cherished for many years.

“I’ve been a fan of the book since I was a little girl and I read it for the first time,” she said. “It’s just such a classic story.”

Like the book, the show is set in the 1860s during the Civil War, but Williams said the play has a contemporary feel, in part thanks to the music.

Williams compared “Little Women” to the musical adaptation of “Les Misérables,” which stays true to the history but features more modern music.

“Even though it takes place in the 1800s, the music has sort of a pop Broadway sound to it,” Williams said.

Williams said she loves the Civil War era and that it’s an important part in U.S. history, but noted it’s provided a few challenges for the cast.

The cast has focused on learning about the clothing, social customs — which were more formal and rigid — and mannerisms of the Civil War era. All the women have performed in hoop skirts during rehearsals.

In a way, the performance has become a history lesson for the actors, and Williams said it’s making them appreciate some of the modern conveniences they didn’t have back then.

“It’s always fun being able to step back into an era and kind of relive it,” she said.

For Riverland, the set will be more representational than other performances. They didn’t recreate the full March home, but they used some props with an open stage to offer flexibility. The same space can serve as multiple places in different scenes.

“It gives us a little more flexibility to play with space, with set and with design,” Williams said. “That’s a much more contemporary style of theater.”

Williams urged people to come out and see the classic tale come to life.

Season coming to a close

Looking back over the 2012-13 season, Williams said she was pleased to see the department was able to touch on a variety of eras and performances.

“It’s been such a wide range,” she said. “This is a really fun one to cap the season off because we get to travel to this period in history that we haven’t visited yet.”

When setting up the 2012-13 Riverland season, Williams looked for stories many people are familiar with, but for renditions that add a new twist and tell the story in a unique way.

“People know the movie, but they might not have ever seen the play before,” Williams said. “It might make them kind of look at the movie in a new light.”

“Little Women” — a musical rendition of a classic novel — fits the season’s theme.

“It just felt like a really good fit for this season,” she said.

“Little Women” will also mark the end of an era, in a way. It’s the last play before tickets become available to purchase online. Starting with Summerset and the full schedule next year, Riverland will begin selling tickets online.

People who prefer to buy tickets in person can still do so, as Riverland will still have tickets available at the box office.