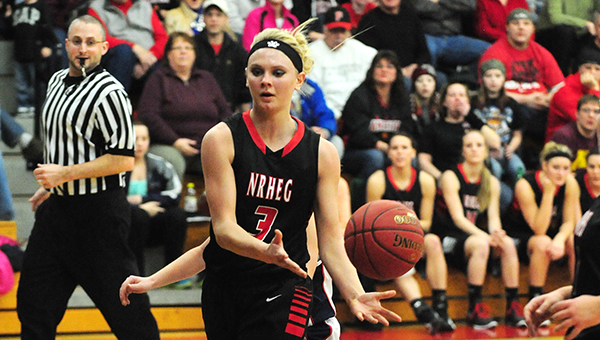 Carlie Wagner of New Richland-Hartland-Ellendale-Geneva dishes the ball in transition during the regular season. For the second straight season, Wagner is the All-Area Player of the Year. Wagner eclipsed her sophomore scoring total of 29.9 points per game by averaging 33.6 points per contest as a junior. — Micah Bader/Albert Lea Tribune

Powering the New Richland-Hartland-Ellendale-Geneva girls’ basketball team to a Class 3A state title was Carlie Wagner.

Wagner followed an impressive sophomore season, where she averaged 29.9 points per game, with 33.6 ppg as a junior. 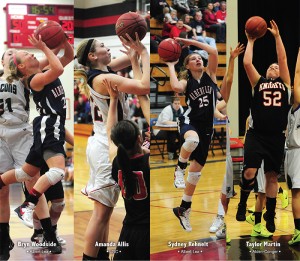 On the biggest stage in high school sports, she excelled even more.

In the Panthers’state quarterfinal win over Pelican Rapids, she scored 31 points.

Wagner stepped up even more after teammate and leading rebounder Jade Schultz tore the anterior cruciate ligament in her knee during opening minutes of the semifinals against Minneapolis Washburn.

Wagner responded by pouring in 48 points to tie her own state record and propel the Panthers to the state championship.

In the title game, Wagner dropped 50 points, and she needed every one, in a 60-59 win over on Braham.

“Carlie’s talents go without saying,” NRHEG head coach John Schultz said. “I could talk all day on that one.”

Despite accounting for 83 percent of the Panthers’ scoring production in the championship, she credited her supporting cast.

“I’m happy. It’s great. But, I don’t take it upon myself. It’s a team thing,” Wagner said on the court after winning the championship.

She was constantly involved in the Panthers’ gameplan, but not only in a shooting capacity. Wagner averaged more than five rebounds and assists per game to go along with 4.5 steals per game.

Other NRHEG players like her sisters Maddie and Marnie, third-team All-Area selection Paige Overgaard and Hannah Lundberg stepped up to remain threats, so opponents could not solely key on Wagner.

Many of Wagner’s scoring opportunities were set up by her teammates. After the Panthers forced a turnover, Wagner exceled by running the floor and finishing in transition. But to get to the fast break, NRHEG needed a rebound or a steal and a good outlet pass.

“Our supporting cast did an excellint job setting her up offensively and being there for the dish on drives as much as we could,” coach Schultz said after the title game.

As a team, the Panthers lost their only game of the season by one point (57-56) against Chaska. They reeled off 30 straight wins, 26 of which were double-digit victories.

Wagner has verbally committed to the University of Minnesota. Growing up in the state, she’s always wanted to be a Gopher. It’s close to home and she is comfortable with the coaches and incoming players, she said.

In addition to earning six school records, Wagner shattered five state records and tied another as a junior this year.

She was selected to be a member of the All-State Tournament team, and she averaged 33.6 points, 5.7 rebounds, 5.5 assists and 4.5 steals per game.

Allis nearly averaged a double-double for the Rebels with 11 points and nine rebounds per game. She also shot 58 percent from the field and blocked 5.2 shots per game.

Woodside led the Tigers by averaging 16 points, three assists and 2.7 steals per game. Her scoring total was third-highest in the area.

“She plays with passion and drive every game and is a natural leader,” Albert Lea head coach Lindsey Hugstad Vaa said. “She has a huge heart and is a very unselfish player.”

Martin led the Knights with 16.2 points, 8.6 rebounds and two steals per game.

After Alden-Conger posted a record of 10-15 last year, Martin was instrumental in the Knights’ sucessful 19-7 record this season.

Her scoring production nearly doubled since last season where she averaged 8.2 ppg.

Schultz led the Panthers on the glass by averaging 8.7 rebounds per game. She also scored 11.7 points per game.

Johnson was third in the North Iowa Conference with 8.35 rebounds per game in addition to her 11.1 points per game.

Hattie Davidson nearly averaged a double-double with 11.7 points per game and 9.5 rebounds per game.

Maren Davidson is fifth on the Vikings’ all-time list in scoring, sixth in career assists and 10th in career steals.

Despite missing part of the season with an injury, Janzig averaged 8.8 points and 8.3 rebounds per game.

Keller led the Knights with 3.8 assists and 3.8 steals per game.

Villarreal led the Tigers interior with six rebounds and 5.2 points per game.

Kortan scored 8.1 points and grabbed seven rebounds per game for the Tigers.