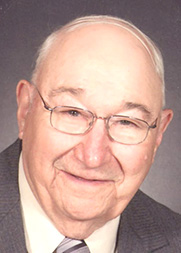 Walter was born in New Richland on Dec. 18, 1923, the son of John and Helen (Sanftner) Boyer. He graduated from Alden High School in 1941. He was a Freeborn County resident all his life. Walter was married to Rose Wach on Aug. 28, 1945, at St. Casmirs Catholic Church in Wells. Walter was a truck mechanic at Wilson & Co. for 37 1/2 years. He was also a self employed carpenter.

Walter was a member of the Eagles Club. He enjoyed fishing, bowling, gardening, softball and golf. His greatest times were spent at the cabin at the lake.

Walter was preceded in death by his parents, daughter in infancy, father-and mother-in-law; six brothers; three sisters; sisters-in-law; and brothers-in-law.