We all have a role in making a better place 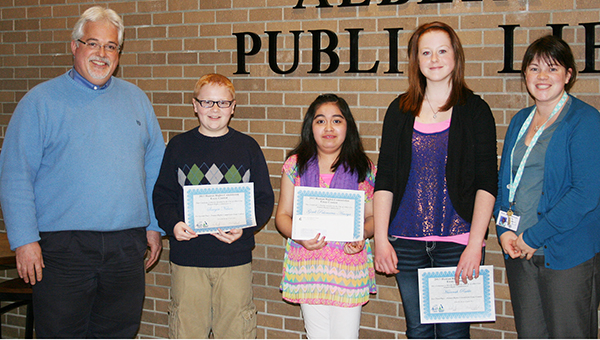 The Albert Lea Human Rights Commission selected the winners of its Human Rights Commission Essay Contest. They are Gisell Palomares-Amaya, first place, $100; Sawyer Nelson, second place, $75; and Hannah Ruble, third place, $50. Gisell’s essay will also be entered into the state contest.
The winners were honored during the Albert Lea City Council meeting on April 8 by Mayor Vern Rasmussen and Human Rights Commission liaison Mike Zelenak. The children read their essays at the Taste of Heritage Festival at the Northbridge Mall on April 6. All the winners were from Erin Gustafson’s class at Southwest Middle School. In the photo left to right are Zelenak, Sawyer, Gisell, Hannah and Gustafson.
–Submitted

The contest was open to seventh graders in the city of Albert Lea. All the winners were from Erin Gustafson’s class at Southwest Middle School. The theme of the essay was, “As a member in your community, what responsibility do you have to protect human rights in your community? How can you make a change in your community?” The students were asked to reference the United Nations Universal Declaration of Human Rights, the United States Bill of Rights or the Minnesota Human Rights Act.

Place: first
Student: Gisell Palomares-Amaya, seventh grade
City: Hollandale
Parents: Pedro and Marie Zuniga
School: Southwest Middle School
As members of the community, we have the responsibility to protect human rights. We can make a change in the community. Some things that I will be talking about are the freedom to marry whomever you want without mattering who they are. The next topic will be about is the right to be given medical care no matter how bad of a condition you are in. The final topic that is will be talking about is about the right to get paid the same amount of money as a person doing the same job as you because that is the right thing to do.

Every person no matter who or where they are should have the right to marry whomever they want. Everyone should have this right because it shouldn’t matter who you are marrying because you should get the same rights as a normal married couple. What would happen if you have been together with a person who is the same gender as you and suddenly the other person just dies? who would get everything they owned? We wouldn’t have these questions if only they would have married the person who they had been together with for so long, but sadly some people think that marrying a person with the same gender as you is wrong and shouldn’t be allowed.

Next, I think all people should have the right to medical care. I think this because everybody should get the same rights as anybody because we are all equal. Many people are dying from diseases and sickness. We could stop a lot of deaths and suffering if only we would give medical care to people in need. Some people are born will illnesses that can’t be cured, but we can still help them feel better or even make their condition better.

So the conclusion I can come up with is for all of us to work together to make these changes happen. These changes will help improve the way we live and the way many other people live.

Acts of kindness can go a long way

Place: second
Student: Sawyer Nelson, seventh grade
City: Albert Lea
Parents: David and Danielle Nelson
School: Southwest Middle School
As a responsible person in my community, I have the ability to protect human rights. I can make a change in my community by treating others like I want to be treated. I have the freedom of opinion and should use it wisely and thought out before spoken. Before placing judgment, I had better make sure I know all the fact.

These basic acts of kindness will go a long way when dealing with peers, elders and strangers. Everyone wants to be treated equally even if we might not look the same, have the same income or have a physical or mental disability. We are brought into this world without having a choice to which we belong. We don’t have the option of saying that you don’t want to live with your parents because they have an old, rusty car and it embarrasses you when they drop you off at school. Should Justin Bieber or Taylor Swift be treated better than you because they are famous and rich?

The year is 2013, and technology is everything to a teen! It is easy for us to text or email somebody that we don’t like. We can make fun of them on Facebook or tweet about them to everyone else in town. What isn’t easy is for us to stand up to the bullies or for the person who is being bullied. We are scared to make a stand fearing “it will only make it worse.” How much worse can things get? We have random shootings in public places that seem to be happening a lot. It is time for all of us to be responsible for our own actions and to help others who are in need of being helped.

I have many options and some I must keep in my head. This opinion, however, is that it is time for all of us to step up and lend a hand to those in need. It might not be easy to see, but if we keep our eyes and ears open, and we treat others like we want to be treated, then we can make a difference. Just to understand that sometimes it is OK to agree to disagree will stop some of the fighting.

Human rights are here for you and me. It is my right to be treated fairly, and it is yours. To be respected, you first must respect! Let’s all work together and make a difference. Isn’t being happy all that anyone really wants?

People have the right to education. If people don’t have education, they usually don’t get very far in life, and I feel like I can help people at Southwest with this human right by tutoring or helping out someone who is struggling in a certain subject. It could change someone’s whole perspective on education if I could help them understand it more. It could change someone’s life a lot! Their careers and welfare depend on education, and if I help, it’ll help their well-being! I would help with science, math, reading and history and make someone smarter.

People have the right to equality. Some people don’t get treated equally and get bullied, depressed and some sadly kill themselves. I can help people at Southwest by being thoughtful and kind to someone who looks treated unequal to everyone else. I will tell bullies to stop picking on them and talk to the victim and be their friend. I feel bad for these people, and I believe in myself to help. Or if someone is a certain race and getting teased, I will find a way to stop anyone from getting hurt. No one deserves feeling unequal.

People have the right to life, liberty and safety. I can make people feel safe at Southwest by stopping bullies and, in a condition of bullying, I will grab some of my friends and tell them to help me stop the bully from teasing, fights and make the person feel like it’s OK and that they are safe from danger. I feel like I can help people feel safe. I mean, who wouldn’t want to feel safe at school?

More Letters to the Editor

Letter: Why the interest from China and Hong Kong?

Letter: Speeders should get jail time

Letter: Who is really looking out for the little guy?