Katie Rossum and Timothy Waalkens of Mankato were married at 4 p.m. Oct. 19, 2012, at St. Joseph The Worker Catholic Church in Mankato. The Rev. John Wilmot performed the double-ring ceremony. 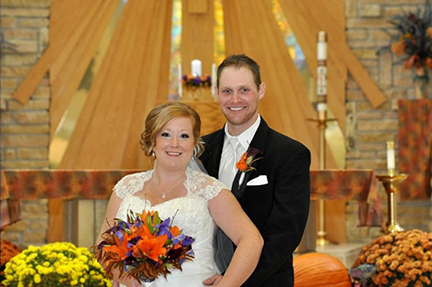 The maids of honor were Becky Rossum and Carmen Wurtz, sisters of the bride of Rapid City. Bridesmaids were Danielle Appel of Burnsville, Kimberly Moen of Denver, Amber Elridge of Minneapolis and Britany Miron of Minneapolis, all friends of the bride.

Flower girl was Haileigh Wurtz of Rapid City, niece of the bride and daughter of Carmen Wurtz.

The best man was Benjamin Waalkens of Superior, Wis., brother of the groom.

The groomsmen were Sam Helgerson of Mankato, Jon Overland of Mankato, Mark Zoller of Rochester, Matt Schultz of Mankato and Eric Veldman of Albert Lea, all friends of the groom.

Musicians were Julie and Bob Dickhudt.

Personal attendant was Jenna Overland of Mankato, friend of the bride.

Floral designer was Lynette Dorfner, godmother of the groom.

The bride is a 2004 graduate of Steven’s High School in Rapid City and a 2008 graduate of Minnesota State University-Mankato with a degree in elementary education. She is employed at Headstart in Mankato.

The groom is a 2004 graduate of Albert Lea High School and a 2009 graduate of Minnesota State University-Mankato with a degree in parks, recreation and leisure services. He is currently enrolled at Rasmussen College in the registered nursing program. He is employed at GreenCare in Mankato.