More than $4,000 worth of prizes was awarded at Riverland Community College in Albert Lea on Friday at the school’s seventh annual high school welding competition.

The event, which was free for high school welding students to take part in, was an opportunity to be judged by a person working in the industry and also to get hands-on experience outside of the high school setting. 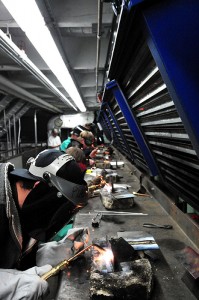 “These kids just love it, and it’s really a chance to see how they excel,” Bob Bender, one of Riverland’s industrial maintenance and welding instructors said.

Albert Lea, Glenville-Emmons and Northwood-Kensett were among 18 others for the event. According to Bender, each of the 80 students and 10 teachers who participated were allowed 25 minutes to complete each of the four sessions on which they would be judged: a written test which covered safety and three different welds: gas, arc and wirefeed.

Tim Larson, a teacher from Medford, brought students to the competition for what he estimated was the seventh time.

“It gives them a chance to have a second opinion on the evaluation of their welds,” Larson said.

Larson said his students are used to his evaluations so it’s a good opportunity for them to hear from a certified welder about what they are doing right and wrong and also a chance to read blueprints that their instructor didn’t make.

Besides winning prizes and competing against each other, Bender said the event was a way to get students to think about a career path and see where welding could take them. Outside of the sessions students had a chance to hear from four different speakers who work within the industry, visit with local vendors and tour the school’s industrial shops. 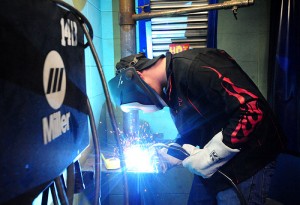 Angie James, an agriculture teacher from Glenville-Emmons, said her school has a focus on career and technical education, so there is a big push to attend the competition.

“I want these kids to experience Riverland and get excited and maybe look at going to a one-year or two-year program,” James said. “Some kids just aren’t four-year college bound and that’s OK; we need that.”

“Now there are pretty clean working conditions,” Bender said. “And, you might not always be the welder, you might be the inspector, the seller, etc.” 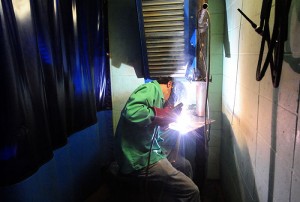 Bender was excited that local vendors and businesses invested time and donations to the competition because the students who attended are possibly the future of the workforce.

Bender hopes in future years the number of schools interested in the free hands-on event will climb because even though 21 schools showed up for the event, he invited more than 100.