Working for her co-workers 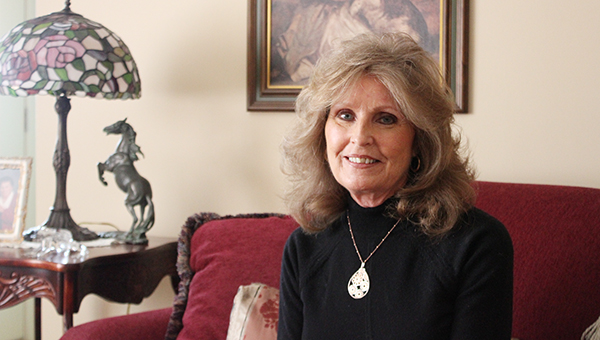 Helen Tukua sits on a sofa in her Fairview Drive home Friday. She wears a necklace given to her at her retirement party by co-workers at Freeborn County Court Services. –Tim Engstrom/Albert Lea Tribune

Two young men on the wrong side of the law were in the waiting area at the Freeborn County Department of Court Services one day in Helen Tukua’s long career sitting behind the bullet-resistant glass at the front counter.

The men began to exchange words and became embroiled in a brawl, right there in the office.

“She hollered at them as a mother would holler at her sons,” said Tom Jensen, director of the Department of Court Services.

The men stopped and took it outside; then the police came and arrested them.

Not too many people in Freeborn County government had been around longer than Tukua. She had been there for 38 years. She retired from her job as an administrative assistant at the Freeborn County Department of Court Services last month.

Her co-workers threw a retirement party for her in the Freeborn Room on April 12. She started back in 1975 as a worker in the License Center. The county auditor at the time, Bob Hanson, hired her.

Tukua said the hiring process was much simpler than nowadays.

“He says, “Do you want to start tomorrow?” And that was pretty much it, she said. Now there is quite a process.

Three years later, Tukua transferred to the Department of Court Services, otherwise called the probation office. In 1978, the office had a director and two probation officers. She joined as a staff support specialist, typing up dictated reports, answering phones and keeping files orderly.

Now there are a director, a support specialist and seven probation officers. For a time, there was a second, part-time support role, but about two years ago, the county cut that role, leaving Tukua to handle the work.

“I tell you, that woman’s fingers just fly,” said probation officer Maureen Gilbertson, who has been in the office for 27 years.

When Gilbertson started, Tukua received dictation for every report and typed them up, in addition to answering phones. Computers didn’t lighten her load, Gilbertson said, as probation officers began doing their own reports. The amount of pretrial monitoring of defendants increased. Tukua made sure reports were due on time, maintained calendars, made copies, stayed calm when dealing with hostile clients, faxed reports, took documents to judges and prosecutors and any number of tasks.

“It wouldn’t be uncommon to come to work and find she had been here a couple of hours in the morning,” Gilbertson said. “And she would stay late at the end of the day, too.”

To be a probation officer, a person has to be tough-minded and sure of being right, Gilbertson said.

“To have an office full of us to contend with cannot be an easy job,” she said.

Yet Tukua kept them in line, making the office run smoothly, Gilbertson said.

Jensen said the department’s numbers topped out in 2008, with about 1,400 clients. He said now there are about 950, though numbers in the spring and summer tend to be higher than fall and winter. A large amount are driving-while-intoxicated cases, which have become complicated over the years. Automated voice mail has made calling agents directly easier, he said.

He said Tukua always treated everyone — whether a person on probation or a law-abiding citizen — with the utmost respect.

“I think that’s why she had the longevity that she did,” Jensen said.

Tukua said over the years she saw people hired, get married and have babies. Now some of those babies are in college or in high school.

“I was there the longest,” she said. “I feel like they are my family.”

Tukua grew up in Hartford and is the daughter of the late Ellsworth and Janet Tukua. They owned Tukua Drainage Construction. She graduated from New Richland High School in 1964. She worked at Wilson & Co. for a spell before working for the county. Her father died in April of last year at age 95, and her mother passed away in June 2005 at 85.

Tukua has a son, Mason Neste, 38, who lives in Albert Lea but has been visiting friends in California the past month. He recently had worked in security at Diamond Jo Casino.

She said the department was understanding when her parents passed away.

Though the department was her second home, she did manage to have her own pastimes. In the 1990s, she liked to drive to the Twin Cities and go to places featuring country dancing, such as the two-step, the three-step and swing. She doesn’t dance much anymore, but she still is friends with many of the people she met.

Tukua also modeled Western wear for Piepers Western Store, a clothing and gear store that closed in 2006 after 48 years in downtown Albert Lea. She also modeled wedding dresses for Courtly Manor, which closed last year after 34 years in business, and she modeled in a bridal exposition.

Today she enjoys working in the yard and decorating her home. She plans to get a part-time job because she is social.

But that’s not happening right away. For now, she wants “me time.”

That could include some travel. She wants head east and visit family in places such as Baltimore, Md., and Charleston, S.C.

She said she tried to do her best for the department and took care of her health so she wouldn’t get sick.

Interesting fact: She really loves horses but has never owned one. She especially likes movies about horses, such as “Seabiscuit.”