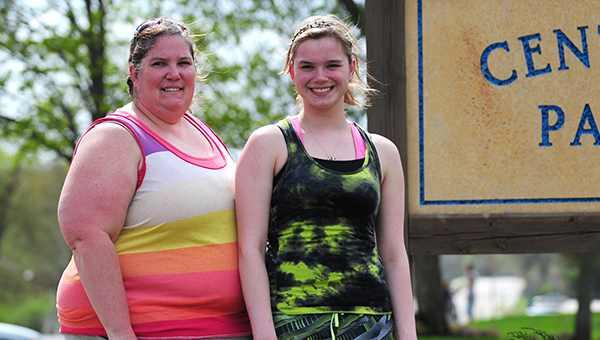 Tammy Krowiorz and her daughter Ashley plan to participate in The Color Dash in Owatonna at 10 a.m. Saturday. The event is set up to raise funds to produce a movie called “To Say Goodbye.” It is a film that attempts to reach those who are bullied or contemplating suicide. Tammy and Ashley are standing in Albert Lea’s Central Park where Tammy has been going on walks to prepare for the 5k race. –Micah Bader/Albert Lea Tribune

A mother and daughter team from Albert Lea will be participating Saturday in the second annual Color Dash in Owatonna.

This is the second year Ashley Krowiorz — a freshman at Albert Lea High School — will take part. Last year, she ran with her cousin, Lynn Rothstein, from Owatonna.

“It was great,” Ashley said. “My favorite part was running through the colors at the stations. You’ll have this big cloud of colored air, and it’ll stick to you.”

According to The Color Dash’s official website, the color is made from “food-grade cornstarch and food-grade coloring,” which is “100 percent natural and safe.”

This year, Ashley will run with her mother, Tammy. Tammy attended the event as a spectator last year.

“It was fun for me to just watch it, even though I didn’t run last year,” she said. “We took a bunch of pictures, and at the end, she gave her dad a big colorful hug.” 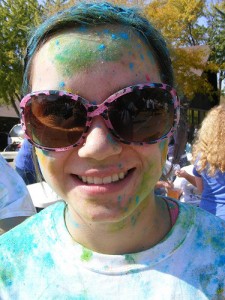 Ashley Krowiorz of Albert Lea is covered with color at the conclusion of the 2012 Color Dash in Owatonna. Krowiorz will participate in the run for the second straight year. –Submitted

Color dashes are held in locations across the United States, and according to The Color Dash website, each one has a different cause to support. The Owatonna version will help raise funds for a movie. However, it’s not a run-of-the-mill flick. It’s a feature film about the aftermath of suicide.

“The film will be donated to junior/senior high schools as well as any suicide prevention or awareness organization that requests it,” The Color Dash website said.

“They can feel like they’re all alone,” Tammy said. “Hopefully when the movie goes out to the schools, it can help with those kids’ self esteem.”

The untamed and non-competitive race does not discriminate, Tammy said.

“There were people in wheel chairs. A person on crutches. Any size, any shape, any age — they’re all there,” she said.

To prepare for the race, Tammy has been going for walks at Albert Lea’s Central Park, she said. Ashley has been getting ready by going running outside of Albert Lea. The Color Dash is the same distance as the Tiger Trot, an event Ashley has also participated in multiple times.

The exercise of running the 5k race is just a plus for the Krowiorz duo. The Color Dash will start in Owatonna at Morehouse Park at 10 a.m. Saturday.

Ashley said she was inspired by the turnout last year.

“It’s just amazing how much people care,” she said.