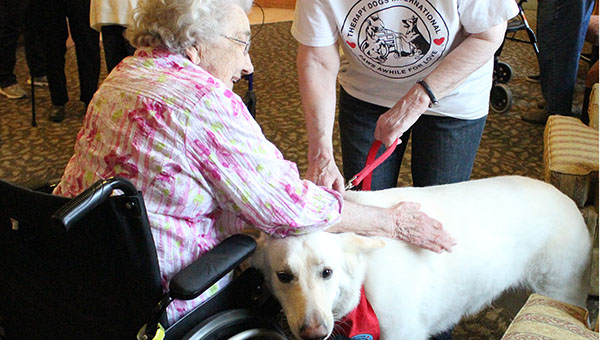 Residents at Oak Park Place are enjoying plenty of different kinds of activities, but one of the most popular things is a visit from a therapy dog.

Therapy dogs are unique in many ways and have been used in schools, nursing homes and hospitals. The dogs must be trained and pass tests to be certified as a therapy dog. 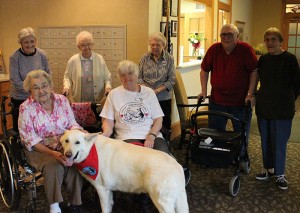 A group of residents in a walking club pose for a photo before beginning their exercise on Friday. Therapy dog Willie, short for Wilhelm, joined the group, along with his owner Lori Ashleson.

Albert Lean Lori Ashleson likes to bring her white German shepard to Oak Park Place because she enjoys seeing residents play with the dog. The 6-year-old dog’s name is Willie, which is short for Wilhelm, and he used to be a show dog.

“I love sharing my dog,” Ashleson said. “They pet him, talk to him, hug him.”

Ashleson said the dog’s demeanor and disposition have to be a certain way before it can be considered a therapy dog. Willie is a happy dog who loves to meet new people.

“Him being so happy makes them happy,” Ashleson said.

Staff at Oak Park Place have seen this effect firsthand. Often, residents will have had pets before they moved there, and therapy dogs can remind them of their pets. No pets are allowed to live at Oak Park Place, but pets can be visitors. 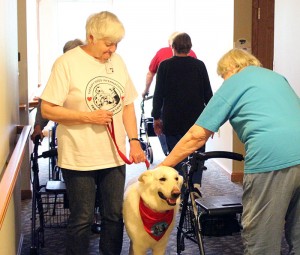 Residents stop to pet therapy dog Willie during a walk on Friday.

“And for the residents in memory care the dogs really have a calming effect,” Activities Coordinator Cindy Bodensteiner said.

A six-year resident, Alice Simonson, said she enjoys visits from the two different therapy dogs who stop by.

“They’re so friendly,” Simonson said. “I usually pet them and give them a kiss on the forehead.”

Last week Willie had a chance to walk with a walking club at the home. Usually he just goes around to different areas, but staff thought it would be fun to have Willie walk with the dedicated group who roam the halls each week to stay active.

Bodensteiner said a few residents really got into walking when the Blue Zones first became popular in Albert Lea. They’ve continued to walk and have logged 919 miles so far. 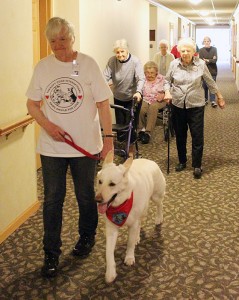 Oak Park Place staff have tried to tailor activities to what residents like to do. One dweller is a retired history professor, so they asked him to give a presentation for the other residents. His speech about presidential fun facts was wildly popular with his neighbors. Then there’s a baking club whose treats get eaten at afternoon coffee sessions, and there’s a group of gardeners who like to plant flowers in the planters around the home.

“We want people to know they don’t have to stop doing things they like to come here,” Bodensteiner said.

Her goal is to try to get more exercise activities going, like Bone Builders or adding yoga to help people work on their balance. Still popular are the Nintendo Wii bowling tournaments between Oak Park Place residents and residents at St. John’s Lutheran Home. Then there’s the religious services and special holiday events, like the Mother’s Day tea party that was recently held.