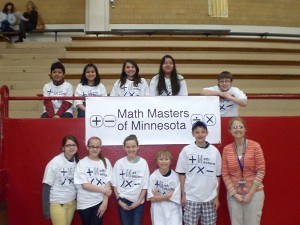 Thirty-seven teams of students competed individually and as teams on eight sets of mathematical problems.

Alma Navarrete was awarded 11th place on the order of operations facts test.

Math Masters of Minnesota began as a competition in 1989 with teams from 44 schools taking part. In 1995 the competition expanded to include sixth graders. This year there were about 5,000 fifth- and sixth-graders who were registered to compete.