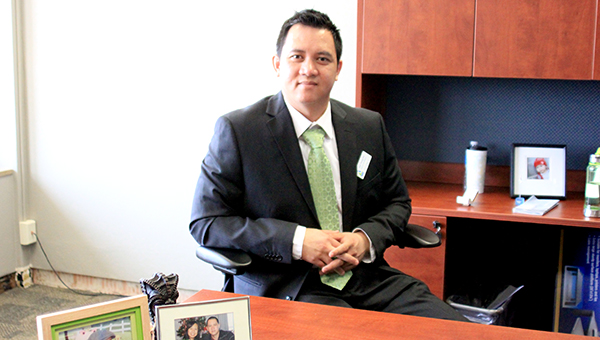 Sack Thongvanh is the new assistant city manager for Albert Lea. His first day was May 13. –Brandi Hagen/Albert Lea Tribune

Thirty-three-year-old Sack Thongvanh started May 13. His first week has been busy, but he said the employees he interacts with have taken him under their wing and showed him around.

Thongvanh has a master’s degree in public administration from Hamline University School of Management and is no stranger to the public sector.

He interned in Northfield and held city administrator positions in Sherburn and Eagle Lake.

Through his commute to work from the Lakeville and Farmington area, Thongvanh became familiar with southern Minnesota.

“Albert Lea was always in my sights,” Thongvanh said.

Thongvanh was hired out of 43 people for the job in Albert Lea as the assistant city manager after Bob Graham, the former community development director retired in December.

One of his goals is to enhance communication between the city and the community.

“That’s a big component to the city when you’re trying to be as transparent as possible,” Thongvanh said.

One of the things he enjoyed seeing on his first day that showed communication between the city and the community was the end of the Citizen Academy, a community police program that offers information about the Albert Lea Police Department’s operation policies and procedures.

Thongvanh said he has always wanted to work in some type of government, but he was never really sure what.

“My original dream was to go into the FBI,” Thongvanh said.

After taking classes at Hamline University, Thongvanh took another path toward public administration.

“Most of my professors were practicing city administrators or they were chief of police or chief of fire so that’s how I got exposed to it and that’s how I fell in love with city management,” Thongvanh said.

Though he will continue to commute to Albert Lea because his wife holds a stable job in Dakota County, Thongvanh hopes to get involved with the Albert Lea community when he isn’t spending time with her and their 21-month-old son, Tyler.

“I want to create that balance with my family,” Thongvanh said.

Thongvanh is originally from Laos, a communist country, but came to the United States to live in Aberdeen, S.D., near his mother’s family when he was about 4 years old. To get out of Laos, his parents had to escape from a refugee camp. To escape, they had to travel at night and hide in the jungles.

“Growing up you look up to your parents, but seeing what my parents went through to get here to provide me with the opportunity where I am at blows my mind,” Thongvanh said.

Since moving to the United States, Thongvanh has not been back to Laos. He hopes someday he can make that trip possible when his son is old enough.

“I wasn’t raised there, but I still feel a connection,” Thongvanh said. “We want to travel there to see where our roots are, to at least see another part of myself.”

Interesting fact: Sack used to ride horses with a friend just about every day for three to four years.