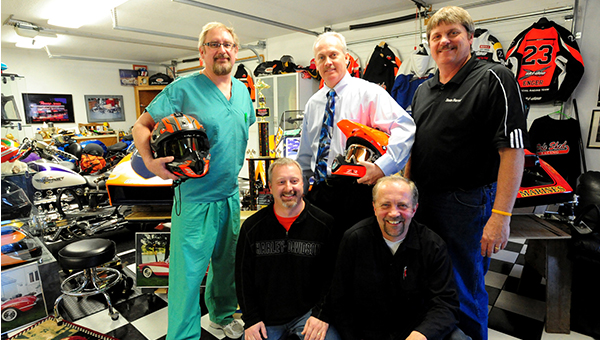 Members of the Poleshed Racing team stand together for a photo among trophies and some of the snowmobiles they race. Pictured in front are Dan Fink and Orrin Mortensen. In back are John Enger, Larry Fisher and Dave Klatt. — Brandi Hagen/Albert Lea Tribune

Pole Shed Racing, a snowmobile race team out of the Albert Lea area, competed at the world championships in Eagle River, Wis., in January.

In one of the races, Dr. John Enger raced against T.J. Patrick, the dad of NASCAR driver, Danica Patrick.

“He just came up to me and introduced himself and told me he loved my sled,” Enger said. 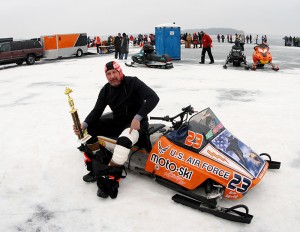 John Enger sits on his snowmobile with his first-place trophy after a win in Waconia. — Brandi Hagen/Albert Lea Tribune

The sled, a 1979 Moto-Ski 340 IFS Sno Pro, displayed an Air Force emblem in support of Enger’s family who has served for 24 years.

The other Pole Shed Racing team member who raced at the world championships had a similar design on the hood of his sled, too. Jeweler Larry Fisher had emblems of all the branches of service on his hood including police and firefighters.

“We get a lot of compliments and a lot of people take pictures of the hoods,” Enger said. “Larry and I both know many people who have served our country and died while serving, so we honor our fallen friends.”

The two men, Enger, 54, and Fisher, 50, started racing with the Pole Shed Racing team that was created about five years ago. In some of the races Enger and Fisher run, they compete against racers in their 20s.

“It’s amazing to know at our age that we can be in good enough shape to compete against them,” Enger said.

In other races, Enger and Fisher are able to compete in the master’s division, a division for racers 50 years old and older.

“The sport has recognized that as people get older they still want to ride,” Enger said. “It’s not a slouch race, though. The 50-year-olds are still going fast.” 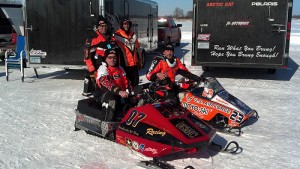 Members of the Pole Shed Racing team took a photo together at a race in Grey Eagle. In back are Mark Rauenhorst and Darren Sonnek. In front are Larry Fisher and Dr. John Enger. — Submitted

Enger missed one of his races due to a knee injury after slipping on the ice, but he raced in the other two placing fifth and sixth. Fisher finished his race in 11th place.

Consequently, Enger earned the Wahl Brothers Vintage Challenge Series trophy by having the most points in wins at his last three races.

Enger said the whole team is what makes the wins possible.

“It takes a lot more than sheer determination and that’s for sure,” he said. “It takes leadership from great teammates. It takes loyalty of each of us to have each other’s backs at all times, as this is a very dangerous sport with high speeds and high impact pressures if you crash. It takes well trained and experienced mechanics who know all about racing and race sled engineering. And, it takes a lot of time and commitment to put these sleds together and keep them running.”

He said the team plans to run more sleds and at more races next season.

The team and the name, came from Mark Rauenhorst and Darren Sonnek who before starting the team were working on mountain and trail sleds for recreation out of Rauenhorst’s pole shed.

“It turned into, if we can ride these, I suppose we should race them, too,” Enger said.

The team has six racers and also has mechanics and guys who handle the sled preparation. Many of the members play multiple roles. The team races in summer asphalt drag races, winter ice oval races and ice drag races.