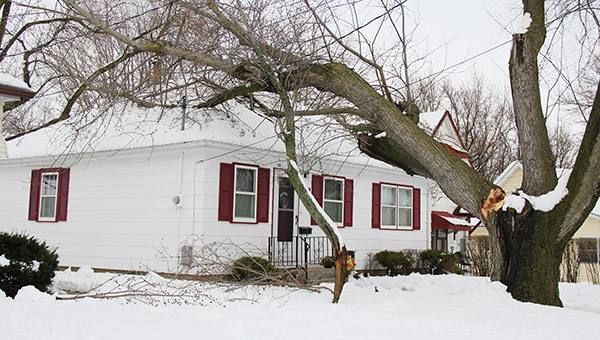 Albert Lea has shattered its record for the amount of snow to fall on any given day in May.

The previous record of half an inch, on May 3, year unknown, was blasted by new snowfall totals from Wednesday evening through Thursday morning, according to National Weather Service records.

Initial reports from the Chanhassen bureau of the weather service reported 10 inches of snow fell in Albert Lea. Measurements are taken at the wastewater treatment plant, but throughout the city various reports were given, ranging from 10 to 14 inches. The Tribune and KATE Radio have reported 12 inches.

“The bottom line is you’ve never had an inch of snow during the month of May,” said Todd Krause, meteorologist with the Chanhassen bureau.

The heavy snow downed power lines and trees in the area leaving thousands without power.

Most totals were reported between 5 and 8 a.m. Thursday.

A group of meteorologists and state climatologists will be gathering to see if a new state snowfall record has been set.

“There’s absolutely no doubt this is one of the all-time May snowstorms for Minnesota,” Krause said.

The National Weather Service Des Moines bureau is reporting Forest City, Iowa, has set a daily and monthly snowfall total in May for Iowa, having received 11 inches of snow. The previous record for most snowfall in a single day and as a monthly total was 10 inches in Lemars, Iowa.

The bureau reported no weather station in Iowa has reported an inch or more of snowfall in the state in May since 1967.