The Albert Lea baseball team controlled Hastings from start to finish Thursday in a 6-0 route during the first round of the Section 1AAA tournament.

Senior pitcher Dylan See-Rockers led the Tigers from the mound. He threw a one-hitter, struck out six batters and allowed three walks. 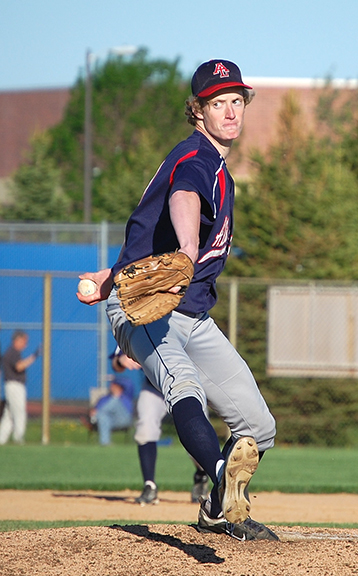 Dylan SeeRockers pitches a 6-0 win against Hastings Thursday to move on in section play. –Shelly Burkard/For the Albert Lea Tribune

“Dylan was the story from the mound,” Albert Lea head coach Joe Sczublewski said. “Our defense was also making great plays behind him.”

After two scoreless innings, the Tigers lit up the scoreboard in the third on a two-RBI single by Makael Lunning. The Hastings pitcher set Lunning up by walking the three previous batters: Ryan McLaughlin, See-Rockers and Johnathan Fleek.

After Derek Burkard reached base on an error, Wyatt Paulsen hit a homer to give the Tigers a five-run advantage.

“He picked a great time to shine. That home run broke the game wide open,” Sczublewski said. “It was nice to see our sophomore right fielder get a big hit like that.”

Albert Lea added one more run in the seventh when the bases were loaded and Paulsen was hit by pitch. 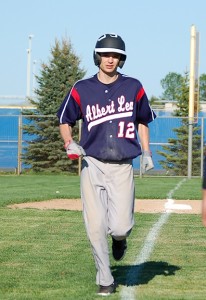 Wyatt Paulsen crosses the plate after a two-run home run against the Raiders on Thursday. –Shelly Burkard/For the Albert Lea Tribune

Sczublewski credited the upperclassmen for showing leadership on the field, and he has a positive outlook on the postseason.

“Our seniors stepped up big time today,” he said. “We’re capable of beating anybody in our section if we play up to our ability.”

After beating Austin on Tuesday, the Tigers have started a two-game winning streak. Albert Lea has a record of 9-10 overall and 8-9 in the Big Nine Conference.

In the second round of the section tournament, the Tigers will play at No. 1 seed Faribault at 11:30 a.m. Saturday.

During the regular season, the two teams met in a doubleheader at Faribault where the Falcons won both games by one run.