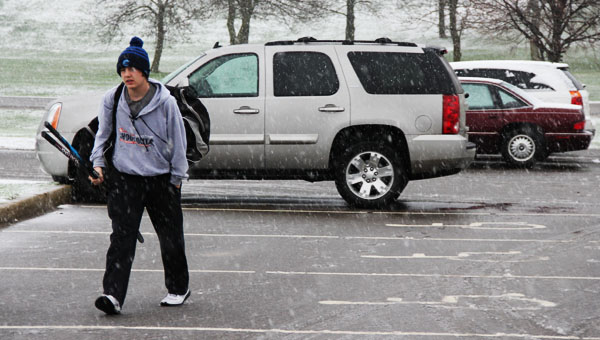 Eighth-grader Dawson Luttrell carries his hockey gear in heavy snow a little after 7 p.m. Wednesday to the City Arena, where he was meeting other players for a spring 4-on-4 league. It is rare to catch snow and daylight at that hour of the day. Sunset on the first day of May was at 8:16 p.m.

Old Man Winter has not given up yet.

The National Weather Service has issued a winter storm warning for Freeborn County and other counties to the west, east and north.

It is in effect until 10 a.m. Thursday. Yes, this means snow in May.

Rain and snow is expected to begin falling Wednesday evening, become heavy snow at times and continue as snow into Thursday morning. More accumulation is expected during the day and into the evening.

The storm could bring 6 to 9 inches of the white stuff to some areas of Minnesota, including Albert Lea, according to the National Weather Service.