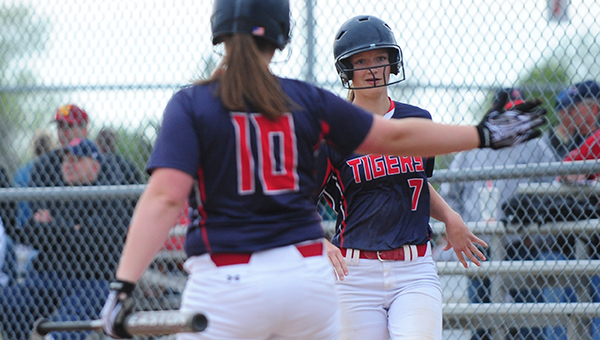 Albert Lea’s Alexa Wood celebrates Friday with Haley Schroader after scoring a run against Northfield in the first round of the consolation bracket of the Section 1AAA Tournament at Todd Park in Austin. Wood scored as a courtesy runner. — Micah Bader/Albert Lea Tribune

AUSTIN — The Albert Lea softball team earned its second win of the Section 1AAA tournament Friday with a 4-2 victory over Northfield in the first round of the consolation bracket.

After beating Austin 8-0 in the first round of the tourney, the Tigers won their seventh game of the season.

“This is new territory for us,” Albert Lea head coach Dan Harms said. “We’ll see what happens from here.”

In the first inning, Northfield took a one-run lead. After a scoreless second inning, Albert Lea took the lead in the third.

It started with a lead-off base hit by Caycee Gilbertson. Haley Schroader followed with a single. Then, Lindsay Reim was hit by a pitch to load the bases with no outs.

A hit by Haley Harms scored Gilbertson, and a hit by Kortan scored Schroader. Harms scored later on a passed ball to give Albert Lea a 3-1 lead.

The Tigers added another run in the bottom of the fourth after loading the bases with one out.

Northfield cut its deficit to two runs in the top of the fifth, but Harms and the Albert Lea defense didn’t allow the Raiders to score the rest of the game. The second out of the inning was made when Gilbertson tracked down a foul ball near the Tigers’ dugout, and the final out of the fifth was a catch by Taylor Thompson in left field.

The game ended on a leaping grab by Kortan at short stop.

With the postseason success, Kortan said the Tigers have

“We’ve been relaxing a lot more and playing as a team,” she said. “We know we’re the Albert Lea Tigers. We can win. It’s not how it used to be. We can do this.”

Harms led Albert Lea from the pitching circle. She faced 30 batters and only gave up two earned runs. Neither pitcher gave up a base on balls.

At the plate, Gilbertson led the Tigers by going two for three with a run scored.

Albert Lea advanced to play Winona in the second round of the consolation bracket. Read about the Tigers’ final game of the season on page 1B.