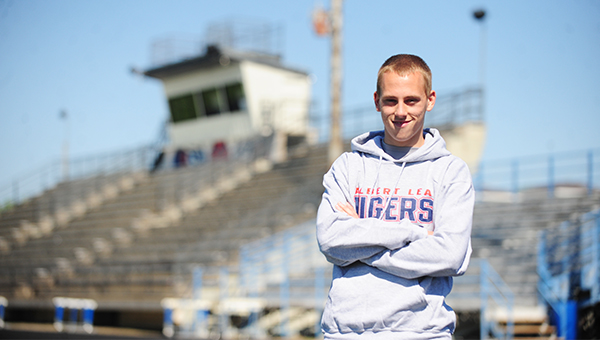 His stats may not jump off the page, but distance runner Lucas Malimanek is a vital cog in the machine of the Albert Lea boys’ track and field team. Just ask assistant coach Lon Nelsen.

“He’s all business,” Nelsen said. “I’ll talk to him about the workout for the day — which is about seven miles — and I trust the guys to do it.”

As a senior, Malimanek has taken the responsibility of leading the distance group of the track team, even on the weekends.

“He never misses Saturday practices, and he supplements his training with bicycle riding and disc golf,” Nelsen said.

Over the course of his high school career, Nelsen has seen Malimanek make strides.

“Each of the four years I’ve coached him, he only gets faster and stronger,” Nelsen said. “He’s a pleasure to work with, because he enjoys to train and compete.”

The part of running Malimanek said he enjoys the most is being free in the great outdoors.

“With cross country in particular, you’re out and you can go anywhere,” Malimanek said.

Malimanek started running competitively in seventh grade, he said. Through his training and tutelage under Nelsen, he has been able to shave time from his events: the 800-meter and 1,600-meter runs.

“I used to have bad running form, but he taught me things to fix it,” Malimanek said. “He knows exactly what to do with us.”

Malimanek’s drive to run and compete is from his father, Patrick Malimanek.

“My inspiration? That would be my dad,” he said. “He ran in high school at Albert Lea and in college at Morehead State.”

Running runs in the Malimanek family.

Malimanek and his twin brother Eli are both runners for the Tigers. While Malimanek competes in the middle distance and distance events, Eli takes part in the sprints.

New this year, the brothers regularly teamed up in the 4×400-meter relay.

Outside of meets and practice, Malimanek also runs with his best friend, Andy Christian.

“Albert Lea distance running will miss this dedicated and talented athlete,” Nelsen said. “Those will be some huge shoes to fill for next season.”