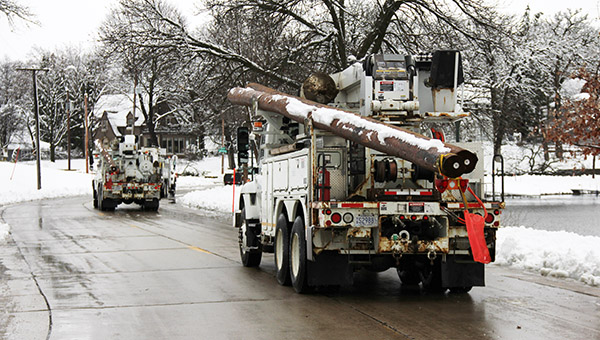 In Doyle Lammie’s 81 years of living he had never seen the weather like he awoke to on Thursday morning — at least not in the merry month of May.

“I’ve never see anything like this on the second of May,” he said. 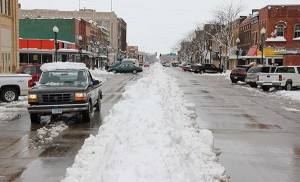 Albert Lea is known for piling snow in the middle of the downtown streets. It is not known for having to do it in May. — Tim Engstrom/Albert Lea Tribune

A foot of wet, heavy snow had downed power lines, snapped power poles and knocked his neighborhood off the electricity grid. And it destroyed the hackberry tree the city planted long ago in his front yard at 305 Garden Road.

But like many of his Shoreland Heights neighbors, he was out Thursday morning clearing snow.

A snowstorm dumped a foot of heavy, wet snow on Albert Lea Wednesday night and Thursday morning. Lingering snow continued through the day. Branches were down throughout the city, and nearly 3,000 Alliant Energy customers in Freeborn County were without power. It dropped down to less than 1,000 by 11:30 a.m., but by 1 p.m. it climbed again to 2,110. By 2:30, the company listed 1,126 customers without power. It serves 12,335 customers in Freeborn County. 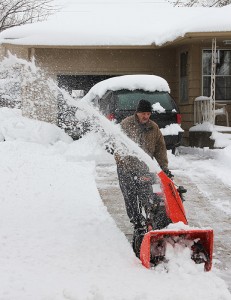 Doyle Lammie of Garden Road clears snow from his driveway Thursday morning with an Ariens snowblower, which he praised as more than capable of handling the heavy snow. — Tim Engstrom/Albert Lea Tribune

Grant Lohse of 319 Garden Road said he used flashlights and a gas fireplace to find his way around his home in the dark Thursday morning. He was hoping to have power return by 6 p.m.

He works for Albert Lea Bus Co. and because classes were canceled he didn’t have to work. His wife was in Pittsburgh and was gathering information about the snowstorm on the Tribune’s website, Lohse said.

Alliant Energy crews hauled in new power poles and wires midday Thursday along Lakeview Boulevard, where a power pole snapped and power lines had closed a lane of the street. The street became closed altogether once they began working.

Ed Schumann of 1015 Martin Road was shoveling his sidewalk around 7 a.m. Thursday and went inside. He heard a loud crash and went outside. A tree fell right where he had been shoveling and landed about a foot from a Ford pickup belonging to Charter Communications he drives.

When he had been shoveling, he could hear branches throughout the neighborhood creak and crack, he said.

“It just echoed. It’s all you could hear,” Schumann said. 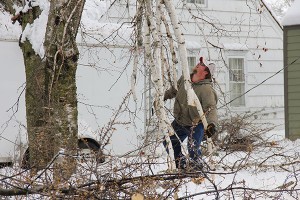 The story of hearing trees crack and branches fall was repeated through many neighborhoods of Albert Lea.

Travis Quam of 1019 Cedar Ave. heard the same sound when he stepped outside to let the dog out. Right away, a branch snapped and fell in a neighbor’s yard. Later in the morning, he worked to disconnect hanging branches in his own trees.

Unlike some of his neighbors, Quam had power, thanks to a generator. He works for himself and gave himself the day off from construction work.

He said he has seen trees and branches in Albert Lea downed from straight-line winds during thunderstorms, but he said he never has seen that same thing happen from a snowstorm, not even one that brought 18 inches of snow, let alone a storm in May.

What more, there was absolutely no snow on Wednesday, Quam said. Brown grass was turning green. 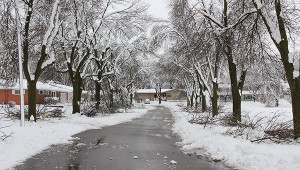 Branches litter the snow-covered ground under every tree on a block of Crescent Drive on Thursday morning. — Tim Engstrom/Albert Lea Tribune

Dan Kjos stood on his roof Thursday at 502 Cardinal Lane, strategizing how he would remove the branch from his roof. That branch was connected to a tree that had fallen. He said it toppled at 12:30 a.m., and he began cutting the tree up at 7 a.m.

Schools across the area canceled classes, giving children a rare snow day late in the semester. Albert Lea High School senior Kenneth Schultz he was perplexed why the district’s phone-messaging system didn’t work. Normally, parents, students and staff get automated calls telling them when classes are canceled. He said he didn’t mind missing his classes, and the roads must have been really bad for Superintendent Mike Funk to call of school.

The 19-year-old stood outside of his family’s home at 215 E. Third St. late Thursday morning to check on downed power lines in the street. The lines deliver electricity to the neighbor across the way.

Schultz said his family’s home had power through the night and day, though the TV occasionally flickered.

“My brother was pounding his TV to see what was wrong,” he said.

Jane Carpenter slowly made her way down her walk and then the city sidewalk. That’s because she was shoveling and the snow was heavy.

Click here to read more coverage of the storm.