Albert Leans react to historic vote at the Minnesota Capitol 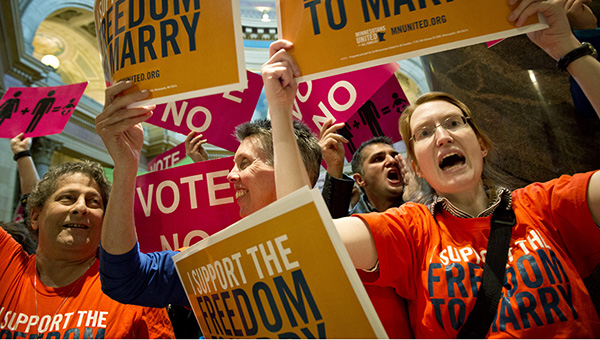 Advocates for both sides chant, sing and plead Thursday as they lined the entrance to the House floor at the state Capitol in St. Paul. The Democratic-led state Legislature in Minnesota is making a push to become the 12th U.S. state to extend marriage rights to same-sex couples. –MCT/Minneapolis Star Tribune

Since Albert Lea High School graduate Tori Fjeldberg came out as gay in the 11th grade, she said she never imagined it would be legal in Minnesota for her to get married.

Though she has received support from her family and friends in her decision, she said she has always felt she didn’t have the same rights as heterosexual people.

“I feel like all of us should have the same rights,” said Fjeldberg, 24.

The tides changed in her favor Thursday when the Minnesota House of Representatives voted 75-59 to allow gay marriage. The Senate is expected to consider the bill Monday, where leaders expect it to pass. Gov. Mark Dayton has pledged to sign the bill.

“I’m so happy, I don’t even know what to think,” Fjeldberg said. “I never thought it would happen. Never.”

The 2006 ALHS graduate said she wishes she and her partner, Alicia Villarreal, 23, could get married right away.

If the law is approved, Minnesota would become the 12th state in the country to allow gay marriage. It would be the first state in the Midwest to pass the measure out of the Legislature. On Tuesday, Delaware became the 11th state to permit same-sex marriage.

District 27A Rep. Shannon Savick, DFL-Wells, who voted in favor of the bill, described the Capitol as an “amazing” place to be on Thursday.

“I knew it was important to pass this bill, but I didn’t know how emotional it would be when it passed,” Savick said.

She said there were hundreds of people rallying at the Capitol from both sides of the issue, and after the vote, those in favor erupted with noise.

“They all started screaming and yelling and hugging each other,” Savick said. “It was just amazing. I have never been in such a loud place in my life.”

Savick’s stance on gay marriage has become publicized in the last week after she spoke out about her brother, who is gay.

“To me, it’s a civil-rights issue,” she said. “I think that our Constitution says that all people are created equal and we all have the right to pursue happiness.”

But not all people agree with Savick.

The Rev. Timothy Reker of St. Theodore Catholic Church is one of them.

“I’m disappointed, especially that the representatives didn’t always reflect the opinions or the views of their constituents,” Reker said after hearing the bill passed. “They claim it’s a matter of conscience, but they don’t always claim that on other controversial issues,” he said.

He noted though the issue has not been talked about in-depth at the church recently, it has caused some tension there in the past.

He said the marriages that take place in the Catholic church will still follow the church’s traditional values and must adhere to the church’s guidelines.

Many of the Albert Lea pastors the Tribune called were reluctant to speak on the issue or didn’t return phone calls.

After hearing of the outcome, the Rev. Shari Mason of First Congregational Church in Austin said she believes the state is on the right path.

“My heart really goes out to anyone who is excluded and anything I can do to bring more inclusion, it’s what we’re called to do,” she said.

By coincidence, the church is hosting a Shower of Stoles — a traveling exhibit of more than 1,000 religious garments donated by LGBT individuals who have served but have been defrocked for their sexual orientation — through May 15. The church also voted in February to become an LGBT open and affirming congregation of the United Church of Christ.

“It’s a way for the church to let the community know we were open and affirming to the LGBT community,” Mason said. “For me it’s an issue of justice. The common theme in the Bible is God calling us to care for the orphan, the widow and the alien. And the life of Jesus was about reaching out to those others, about including all.”

In opposition to the bill, the Rev. David DeFor, of the Austin Church of Christ, said the issue is Biblically based and not just his opinion.

“Same-sex marriage cannot produce children,” he said. “By passing this bill, they’re trying to redefine marriage, which cancels out centuries of definition in culture.”

DeFor said children will be the losers if the bill becomes law.

“We know all of the studies show that the healthiest way to raise children is one man and one woman, and if that’s the case, then children are going to be put in a tense situation that’s not healthy,” he said.

An amendment to the bill, which adds “civil” to the state’s marriage law, aims to draw a line between civil and religious marriage ceremonies, and protect religious groups that choose not to marry same-sex partners, but DeFor cited cases in other states where religious groups were sued after refusing to marry gay people.

DeFor also said it’s not right that anyone against same-sex marriage is labeled a homophobe.

“I’m not against people,” he said. “There’s still a loving God, but to drive it down people’s throats is anti-Biblical.”

Mason said her view on same-sex marriage also fits with her interpretation of the Bible.

“For me, it fits with my understanding of the Bible that all should have the right to marry,” she said.

If it becomes law, she said, she would wed same-sex partners.