Glenville-Emmons lost 14-0 Monday to Blooming Prairie in the first round of sections. 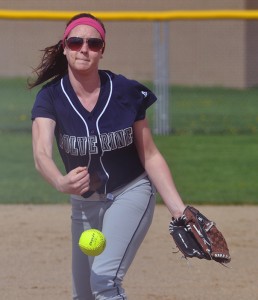 Glenville-Emmons’ Madi Ziebell fires a pitch against Blooming Prairie in the first round of the Section 1A West Division softball tournament Monday. — Rocky Hulne/Albert Lea Tribune

Madi Ziebell struck out four batters and allowed 11 hits. The Wolverines lost 14-0 in five innings. Glenville-Emmons concludes the season with a record of 5-8. The Wolverines began the season 0-2, but they won three of their next four games to get back to .500.