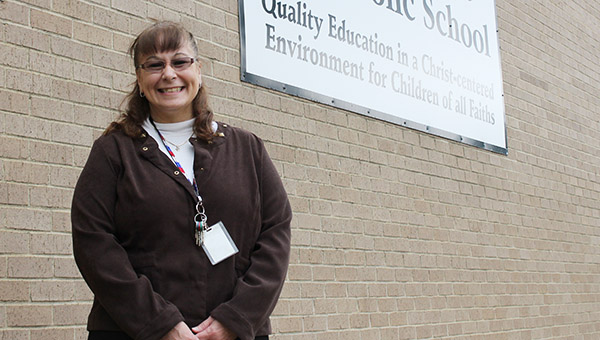 St. Theodore Catholic School will again go through some changes. Its fourth-grade teacher, Sue Amundson, will take over as principal for the upcoming school year.

Amundson will replace Shawn Kennedy, who had been leading the school for the 2012-13 school year. Amundson said Kennedy chose to leave because he was commuting from Adams and wanted to be closer to his family. She said she’s looking forward to leading again, because she was lead teacher before Kennedy became the principal last summer.

“Then I chose to stick with the classroom, but now I think it’s time,” Amundson said.

She’s been with St. Theodore Catholic School since it started in 1995 and before that was a substitute teacher in both Albert Lea and Alden for eight years. She has enjoyed teaching throughout her career and remembers helping younger students with their homework on the bus and volunteering in the kindergarten room.

“I think it was a calling,” Amundson said.

Some of her goals for the school are to continue to work on growing enrollment. Amundson mentioned that she hopes parents who feel their children’s class sizes are too large should come tour St. Theodore because its class sizes are smaller.

She said she hopes to see the new preschool program thrive and said it already has at least 13 children signed up for the fall. Getting more technology and continuing to work with students are other goals. She doesn’t have to worry too much about getting more parent involvement, though.

Amundson grew up near Twin Lakes and now lives with her husband, Alan, just 1 1/2 miles from her first home. They have four children, two granddaughters and a grandson on the way. She enjoys babysitting and spending time with them. Amundson said she’s also glad to have all six of her siblings living in southern Minnesota or northern Iowa. In her spare time she enjoys walking, biking and camping.

To be principal, she had to have a master’s degree, but she had already received that in 2006 from St. Mary’s University of Minnesota in Winona. Her undergraduate degree in elementary education was from the College of St. Benedict in St. Joseph.

Her Catholic faith is an important part of her life. She’s a member at the St. James Parish in Twin Lakes. With the church she is a Eucharist minister, choir member, treasurer of the women’s council and youth coordinator, among other activities.

And though she has had other odd jobs throughout her life, Amundson said she always comes back to working with children. What she likes best is encouraging children to keep working at a problem and then seeing them smile once they figure it out.

“I always tell them ‘How do you know you can’t if you haven’t even tried?’” Amundson said. “I say ‘You can do this,’ they figure it out and then they’re beaming.”