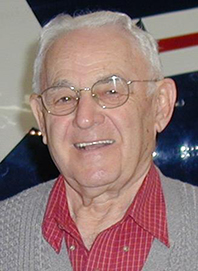 He was born on Sept. 11, 1923, in Artas, (Campbell County) S.D. He graduated from North High School, Minneapolis, in 1941. Foregoing an appointment to West Point Military Academy, he enlisted in the Army Air Corps after graduation and served in Texas until 1944, whereupon he was honorably discharged. It was while in service he met the love of his life.

Upon returning to Minnesota from the Army Air Corps in 1944, he joined his family-owned business, Morris Furniture, located on Clark Street in downtown Albert Lea. In 1960, he became the principal owner. Charles led both the design and construction of the business, when he decided to make the visionary move to a highway store in 1964. He semi-retired in 1977 to supervise construction of his dream home he designed on Albert Lea Lake. In 1988, at the age of 65, he fully retired.

Charles was a devoted husband, father, grandfather, brother and friend, a voracious reader, a lifelong learner, a mentor to many and a quiet philanthropist whose favorite gifts were given to those which benefited our youth. Charles was active in many civic organizations, including Rotary, Disabled American Veterans, Masonic Lodge and Elks. He enjoyed riding horses, bowling, playing cards and gardening. One of his greatest pleasures was having family weddings and get-togethers in his beautifully landscaped yard with its gorgeous gardens.

Charles was the son of the late Paul and Pauline (Kagan) Kenis. He was preceded in death by his son Gregory (Lois) Kenis, his grandchildren Leah, David and Amy Kenis, his sister Sarah (Benjamin) Cart and brother Ivan (Helen) Kenis.

The family will be eternally grateful for the care, love and kindness shown to Charles by the staff at Visiting Angels, Mayo Hospice Albert Lea and The Good Samaritan Society in Albert Lea. You truly are God’s hands on earth!

Charles felt so blessed to have lived a long, full and happy life. So at his request, the family will host a celebration of life at Bayview/Freeborn Funeral Home, 1415 N. Minnesota Highway 13, Albert Lea, MN, 56007 on Saturday, May 25. There will be an open house from 1:30 to 3 p.m., with a short program and military honors immediately following. In lieu of flowers, donations in Charles’ memory may be made to The American Cancer Society, P.O. Box 22718, Oklahoma City, OK 73123-1718 or your favorite youth organization.