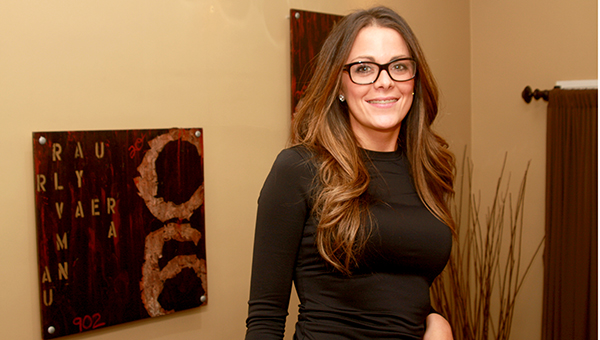 Abby Murray stands in front of the paintings she made that symbolize her children. — Brandi Hagen/Albert Lea Tribune

As a working mom sometimes the most peaceful place in the house is tucked away in the cluttered basement or sitting on the back deck with a paintbrush and canvas.

Sometimes that time of peace lasts 30 minutes and other times it lasts three hours or more. 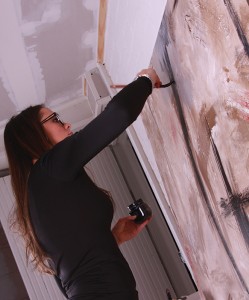 Abby Murray works on a painting for her mother-in-law. Murray has taken the painting back a couple of times to make changes. — Brandi Hagen/Albert Lea Tribune

Abby Murray, a 29-year-old interactive marketing coordinator at Alliance Benefit Group in Albert Lea, has always had a knack for design whether it be graphic or interior.

When she isn’t spending time with her husband, Jon, or her three children Ayva, 6, Sienna, 4, and Charlie, 1, she enjoys spending time in front of a canvas with acrylic paints and letting her creative juices flow.

“I don’t know how I find the time, but when I do, I like to lock myself away,” Murray said.

Murray made her first ever purchase of canvas after becoming inspired by the colors of a pear while she was in college at Arizona State University where she graduated in 2006.

The two canvases she originally bought have stuck with her and today hang in the dining room of her Albert Lea home.

Since beginning her painting hobby about four or five years ago, Murray has completed about nine pieces.

In addition to using acrylic paints, sometimes Murray incorporates texture to stray away from cookie-cutter art and add more interest.

Some of the pieces Murray completed over a short time, while others took more than a year to complete.

“I have that problem, when is it ever good enough? I think that’s something I’ll always try to work on — learning when to stop,” Murray said. “It’s tough to learn.” 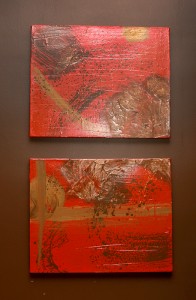 These are the first two pieces of canvas Abby Murray bought in college. Today they hang in her dining room.

When the weather is warm and the sun is shining, Murray enjoys painting outside on the deck behind her home.

“I can be as messy as I want to be and hose it off when I’m all done,” she said.

When the weather is unsuitable to paint outside, Murray paints in her basement.

“There’s nothing glamorous about it,” Murray said. “But it’s the only space I didn’t care about getting paint on the floor because it’s completely unfinished. So, it worked.”

An advantage of making her own paintings is that Murray can look at the space where they will hang and make them to her liking. It’s actually one of the reasons she started painting — she could never find the right piece in a store to fit the bill.

Sometimes, even after a canvas is hung on display, Murray takes it down to add paint or change the look of the piece until she’s satisfied.

“When I know what I want and I can’t find it anywhere I just have to make it myself,” Murray said. “It takes me a lot longer and I drive myself crazy in the process but the outcome is so much better than me going and buying it, and then it’s meaningful.”

Murray’s inspiration comes from several different things including her life experiences, children, family and other art.

Speaking of her kids, Murray said they don’t quite understand her art.

Some of the candid things they’ve said have been, “Mom, why are you doing that?” “What is that? It looks like you spilled paint on there.”

Murray expects her children aren’t the only ones with opinions.

“Some people appreciate it,” Murray said. “That’s the whole essence of art. There’s certain people who have an eye for certain things and a taste preference for certain things. That’s the great thing about art, it’s all in the eye of the beholder. That’s what makes this fun.”

While Murray is flattered when other people enjoy her pieces, the experience and meaning behind each piece is more significant to her.

“You don’t have to worry about everyone liking it,” Murray said. “There’s something freeing about that.”

Three of Murray’s most-treasured paintings hang in the stairway of her home.

The paintings are ones she made to symbolize her three children. Each one incorporates the child’s name, date of birth and pages from the dictionary from the letters that spell their names.

Murray has given her art as gifts and donated them to fundraisers but isn’t so sure she’d ever sell one. She has no idea how she would price them because of the time and energy that goes into making a piece.

“I’d much rather give them as gifts or donate them than try and put a price tag on them,” she said.