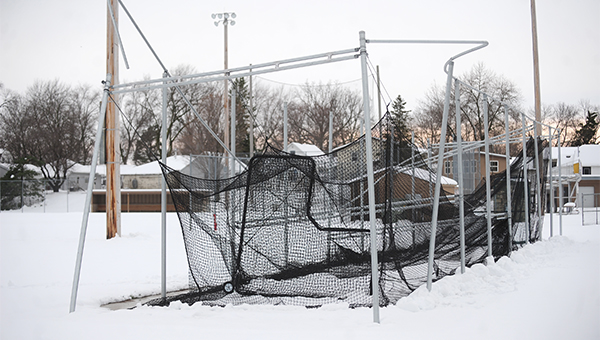 Beams from the two-year-old batting cage at Hayek Field remain ajar after the weight of the snow made them collapse. — Micah Bader/Albert Lea Tribune

The last time the batting cage at Hayek Field was this mangled, a tornado was the culprit.

The weight of dense snow from Wednesday’s storm had a similar effect. 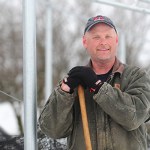 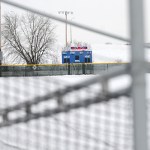 Like the rest of the city of Albert Lea, Hayek Field field was covered in snow after Wednesday’s storm. The Albert Lea baseball team will need to wait for the snow to melt and the field to dry out before play resumes. — Micah Bader/Albert Lea Tribune 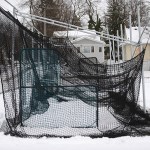 The batting cage at Hayek Field stands in disarray after it collapsed under the weight of snow. — Micah Bader/Albert Lea Tribune

According to Enderson, the estimated damage to the two-year-old structure ranges from $3,000 to $5,000.

The worst damage to the cage was done to the top rails on the structure. While many parts were ruined, some pieces are salvageable, Enderson said.

“It’s not totally ruined. There was a big push for us at the time to make sure we had PVC tubing with the posts slid down in them if something like this ever happened,” he said. “Now, we can just jerk those posts out without having to bust out the concrete.

The cage was a joint purchase by the City of Albert Lea and the boosters at the high school. It cost about $6,000 to build, Enderson said.

“It’s not the end of the world,” he said. “But, when you have ventures like this, where you work hard to raise dollars, and then in two years it looks as bad as it did when the tornado came through, it’s a shame.”

A taco fundraiser to help the baseball team with projects like repairing the batting cage will be held at the Moose Lodge from 5 to 8 p.m. tonight.

Since the cage was a joint purchase, the booster club will work with the city to make repairs.

“Hopefully being baseball season, it’ll add some incentive to get it done,” Enderson said “Right now we can’t hit before games, and we do work in the cage every practice.”

Within the last few days, the padded carpet in the cage was attached to the concrete so it wouldn’t blow around during storms, Enderson said.

“We just got it fixed last week. It’s just ironic,” he said. “We’d been working on getting that done for two years, and then just all of the sudden, it’s shambles.”

Now, the Tigers will practice in the gymnasium, as they had done earlier in the season.

Next, the Albert Lea baseball team will play a doubleheader against Owatonna at Mankato East weather permitting. The first pitch of game one will be 11 a.m., and game two is slated for 1 p.m.