DEXTER — It’s quite clear to any motorist on Interstate 90 that one wind turbine near Dexter doesn’t look like it’s supposed to.

Wind farm technicians and officials with EDF Renewable Energy believe one wind tower, just northeast of Dexter, was struck by lightning on April 24, which mangled one of the structure’s 37-meter, 14,000 pound blades. The blade is nearly bent in half but still attached to the structure, hundreds of feet in the air. 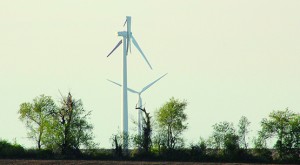 A wind turbine near Dexter awaits repairs off Interstate 90 after one of the 37-meter, 14,000-pound blades was likely struck by lightning in April, according to EDF Renewable Energy officials. –Matt Peterson/Albert Lea Tribune

Steve Powell, operations manager with EDF in Dexter, said a crew will replace the blade and get the turbine running by early June.

“We’re planning to have cranes on site next week and start the removal process,” Powell said, and added the turbine could be operational between June 1 and 3.

After several inspections, Powell and technicians believe there is no other damage to the wind turbine’s equipment.

The 1.5-megawatt tower produces just a fraction of the Wapsipinicon Wind Project’s power and won’t adversely affect operations; however, Powell did not say how much repairs would cost.